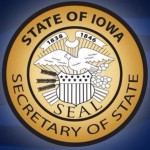 In a statement issued Saturday, Pate said, “Today I was shown a piece of literature from the Cruz for President campaign that misrepresents the role of my office, and worse, misrepresents Iowa election law.”

Pate, whose office oversees all elections and campaigns in Iowa, said the Cruz mailer implies voters could somehow be legally liable if they do not attend the Iowa Caucus.

“Accusing citizens of Iowa of a ‘voting violation’ based on Iowa Caucus participation, or lack thereof, is false representation of an official act,” Pate said. “There is no such thing as an election violation related to frequency of voting. Any insinuation or statement to the contrary is wrong and I believe it is not in keeping in the spirit of the Iowa Caucuses.”

Pate also noted his office “never ‘grades’ voters. Nor does the Secretary of State maintain records related to Iowa Caucus participation. Caucuses are organized and directed by the state political parties, not the secretary of state nor local elections officials. Also, the Iowa Secretary of State does not ‘distribute’ voter records. They are available for purchase for political purposes only, under Iowa Code.”

Pate caused a flurry of Twitter and Facebook commentary on his statement, including criticism from as far away as Tennessee, where Sen. Frank Niceley, a member of the Tennessee General Assembly, took issue with Pate’s judgment.

Cruz’s campaign rivals have also been quick to capitalize on the incident, with Republican front runner and billionaire businessman Donald Trump calling the mailer “dishonest and deceptive.”

Studies have shown that voter-shaming and peer-pressure techniques can be effective to motivate less likely voters, according to political scientists, but they also run the risk of backlash from voters who feel their privacy — and their neighbors’  — has been violated.