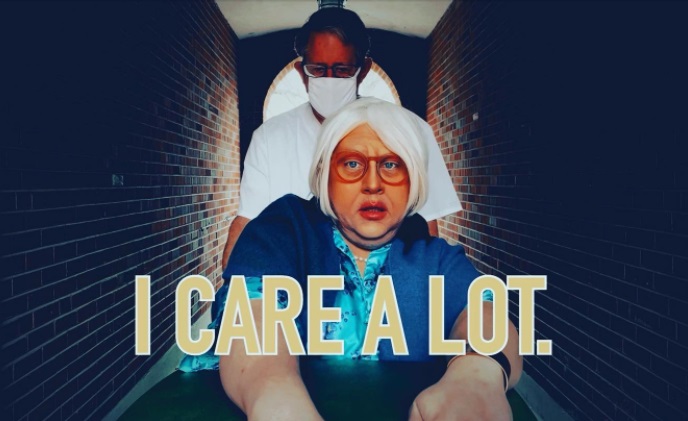 Loretta Stone is the creative force behind the “I Care a Lot” parody video that was released this week to great acclaim. ThePerryNews.com caught up with Loretta, a Perry native, and posed a few questions to the filmmaker.

TPN: What led to the video in terms of your artistic and professional development? Any prior films? Where did you get your skill set?

Loretta Stone: I was asked to do a virtual drag show called Netflix&Drag, a collection of numbers from various drag artists inspired by Netflix’s original content. I hadn’t done anything like this before, but I think my history as a photographer and lover of TV and movies helped guide me through it.

TPN: Where was the film made? in Perry? How long did it take to make? Is this the first production by Loretta Stone?

Loretta Stone: This is the first project of this level I’ve attempted. I’ve done live virtual performances but nothing where this type of editing and production was involved. I would say, beginning to end — from making the mix I was lip syncing to until the last moment of editing — it took probably two weeks. And it was all shot in my apartment in Des Moines as well as parts of the building and surrounding courtyard.

TPN: The video appears to be a musical horror, with money and beauty among its dominant themes. Does the video as a whole have antecedents or influences, such as “The Rocky Horror Picture Show”?

Loretta Stone: I think “musical horror” is an appropriate take. I wouldn’t say it was necessarily inspired by anything other than the source material, but it was stylistically informed by my previous work. My drag heavily involves mixes, which are numbers I create by editing together music with clips from . . . anything, really, to tell a story. The audio you hear in this video, that’s a mix. I just usually perform them live.

TPN: According to the credits, you act, direct, shoot, edit and do hair/makeup. What does that leave? costumery? site scouting? writing?

Loretta Stone: Yeah, I did a lot of this video by myself, but I had a little help. You can see the orderly in the video is the only person that’s not me, but rather my dad! He was willing to go along with my strange ideas and even helped a little behind the camera as well. I think it’s pretty special that a man of a certain generation is not only willing to help his gay, drag queen son shoot a stark music video but also be enthusiastic about it. Shout out to Pat!

TPN: Viewers might be shocked and disturbed by the brutality of the short film, the sense of moral torture quite apart from the firearms violence. What are you getting at with Marla Grayson?

Loretta Stone: Well, obviously, it’s a parody of the film “I Care a Lot,” which sparked some controversy early in the year. It’s a movie about a woman who gains guardianship, through shady means, of senior citizens and then basically drains them financially — not to mention mentally and physically. I think the film is so polarizing because this stuff really happens and it’s monstrous. I was listening to a podcast that said the film was an interesting look at late-stage capitalism, which sparked something. That, combined with the fierce performances of the female leads, I thought I could recreate it in my own way. The film itself obviously explores the lengths some will go to for money and power, and while I don’t think America is alone in this greed, it’s certainly prominent in our culture. There’s money to be found in pain and suffering and even death, and I think America thrives on it. Perhaps you’ll notice the only colors really featured in the video are red, white and blue. I also wanted to give the end a rework. SPOILERS: Diane Wiest’s character, Jennifer, doesn’t get a satisfying ending in the movie, in my opinion, so I also wanted to change it to satisfy my own disappointment in where the film goes.

TPN: What’s next for Loretta Stone?

Loretta Stone: What’s next? I mean, I definitely have the itch to continue producing this kind of content. I’ll also be hosting a show that has yet to be announced, but whatever’s next, I’m looking forward to it.

The gift of bird watching: The common grackle