It took 20 years, but virtually all of Iowa’s corn and soybeans are now grown from genetically modified seed. It must be safe, or we would not be doing it, right?

If anyone in central Iowa is still skeptical about the safety of genetically modified (GM) foods, her fears will be fed Sunday afternoon at the Perry Public Library when Steven M. Druker, author of “Altered Genes, Twisted Truth: How the Venture to Genetically Engineer Our Food Has Subverted Science, Corrupted Government and Systematically Deceived the Public,” discusses his research.

Genetic engineering, also known as bioengineering or recombinant DNA technology, restructures the genomes of living organisms by moving, splicing and re-arranging pieces of DNA in formerly impossible ways that are not found in nature.

Druker’s book explains the revolutionary technology behind genetic engineering, how it has evolved since its development in the early 1970’s and how the rise of GM foods now affects the world’s food supply.

According to his publicist, Druker claims the mammoth and reckless GM venture has been chronically and crucially dependent on deception. He believes the thousands of biotech advocates worldwide — including many scientists and academic institutions — have systematically compromised the data and distorted the science in order to enrich a few agribusiness giants and get GM foods into America’s food supply.

Druker uses transcripts from scientific conferences, statements by government agencies, newspaper reports, journal articles, books by historians of science and inside information from scientists who witnessed events firsthand to build his graphic account of how this elaborate sham has been perpetrated. 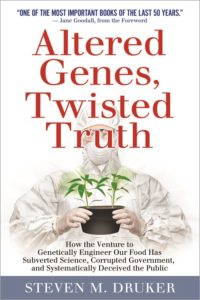 He shows how the corporate biotech industry has deceived not only the media and the general public but also the U.S. Congress and a host of influential individuals, such as Bill Clinton, Bill Gates and Barack Obama.

Druker uncovered some of the key evidence through a lawsuit. As a public interest attorney and executive director of the Alliance for Bio-Integrity, he forced the U.S. Food and Drug Administration (FDA) to divulge its files on genetically engineered (GE) foods.

The FDA files revealed that political pressure was brought to bear on officials, who covered up the extensive warnings of their own scientists about the abnormal risks of GM foods. Druker claims they misrepresented the facts and then violated the law by allowing these novel products to be marketed without having first been proven safe through rigorous testing.

In organizing the suit, Druker assembled an unprecedented coalition of eminent scientists to stand with his organization as co-plaintiffs. It was the first time scientists sued a U.S. administrative agency on the grounds that one of its policies was scientifically unsound.

Druker has credentials. He has served on the food safety panels at conferences held by the National Research Council and the FDA, lectured at numerous universities and met with government officials throughout the world, including the U.K.’s environmental minister and the heads of food safety for the U.K., France, Ireland and Australia.

He conferred with an interagency task force of the Council on Environmental Quality in the Clinton administration, and his articles on GM food have appeared in the Congressional Quarterly Researcher, the Parliament Magazine, the Financial Times and other journals.

Druker’s free lecture will begin at 3 p.m. in the community room of the Perry Public Library. Beaverdale Books will have copies of his book available for sale and signing.