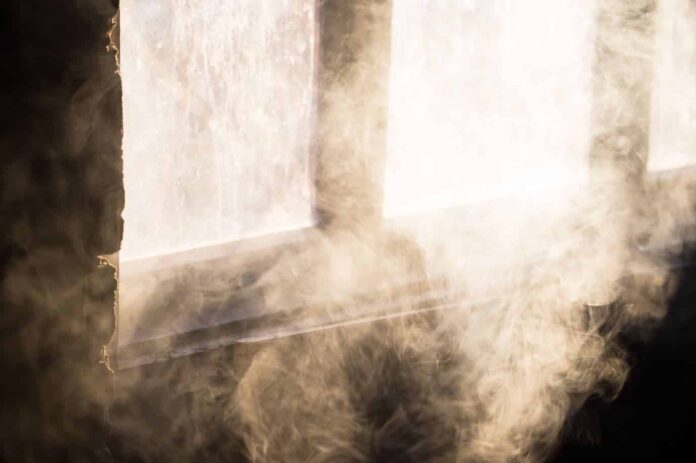 I don’t even doubt for a minute that our earliest memories are always rooted in our sense of smell because the very first thing I can ever remember is sitting on my dad’s lap while he was smoking a cigarette. We were watching “The Lone Ranger,” and I seem to recall the room was very dark except for the tiny black and white TV.

I have more memories of cigarette smoke than I do of my own mother when I was that little. I even remember my dad’s parents more than Mom because Grandpa and Grandma Eakins smoked like chimneys. I know Mom and Dad smoked, too, but the scent of cigarette smoke severely permeated my grandparent’s home.

Grandpa Eakins’ place had a window on the west side of the living room. As a toddler, I would look up and marvel at the beams of sunlight as they passed through the billowing clouds of cigarette smoke. From my perspective, those smoke clouds wafted way up into the very Heavens. Being quite small, I was absolutely mesmerized by those rays of sunlight passing through the smoke.

Grandpa had an easy chair on that side of the room, and he had one of those metal ashtrays on a pole, the tray being about the same height as the arm of his chair. I remember that tray very well because I once grabbed a little handful of butts and tried to eat them.

Suffice to say that wasn’t exactly a pleasant experience. I was caught after the fact due to no small amount of crying and sputtering. Someone said, “Ackey,” but no further admonition to stay out of ashtrays was ever necessary again. I was but a tyke yet I absolutely do remember that very unpleasant incident.

I speak of my memories of cigarettes because they’re inextricably linked to my recollections of my grandparents place and Grampa’s big console black-and-white TV. Grampa Eakins worked at John Deere, so he always bought top flight TVs. That TV stood taller than I.

I remember watching the old Hamm’s Beer Bear commercials as well as ads for Busch Bavarian Beer on that old behemoth. The latter entailed a guy in dark sunglasses skiing down a mountain slope while someone was yodeling.

I vaguely recall David Jansen doing a cigarette commercial, but I fail to remember the brand. Jansen was the star of “The Fugitive” series of the 1960s as well as starring in “Harry O” some years later. I certainly recall the old Brylcream slogan. “A little dab’ll do ya!”

Being a little kid, I was quite fascinated with all the bubbles they blew for the closing credits. Heaven help me, but I’ll never be able to expunge the Champagne Music Theme out of my head. I’ll need to endure that ear-worm for the rest of my mortal days.

Indeed, much of the music I heard early on was from the TV. I remember some commercial jingles and the theme music of a few programs, but that’s about it. Of course, the theme music from “The Lone Ranger” was imprinted on me that early.

If I can be forgiven for straying a little, it’s a clear sign one is an intellectual if one can listen to the “William Tell Overture” and not instantly think of “The Lone Ranger.” Anyway, the first time I heard a lot of songs and artists was while watching TV.

Even with my limited access, I did have some exposure to other genres besides pop music. After all, KBIZ AM played a lot of show tunes, soft jazz and basically what used to be called dinner music.

Grandpa and Grandma Eakins had one of those old-fashioned, wood-exterior, three-foot-tall, top-of-the-line Philco radios. It had a huge illuminated tuning panel on the top six inches of the front of the device. The multitude of buttons and knobs on it had me perplexed, but I wasn’t allowed to play with it anyway.

When I finally grew tall enough to use the controls, I was frequently cautioned not to crank up the volume so loud. Of course, this was back before the days of solid-state radios and televisions. I don’t really know how old their radio was, but it did operate on the old vacuum tubes. Accordingly, it took a minute or so for it to warm up after you turned it on.

The same went for a lot of the larger TVs then, too. The funny thing was they seldom turned the radio on as Grandma had the TV on all day, watching soap operas and game shows. As soon as Grandpa got home from John Deere around 4 p.m., it was the afternoon movie on WHO and the evening news on KCCI back when it was still called KRNT TV.

The radio only came on when the TV was on the fritz or when there was nothing but sports on TV. The only thing they watched that passed for a sport was pro wrestling. Barring all that, the radio came on. Even as a little one, I knew the deep, mellow and rich tone of that radio was something very, very special.

Now that I think about it, it seems to me my mother’s parents also still had the wood cabinet radio Mom and her siblings listened to coming up. It wasn’t nearly as big as Grandpa Eakins’ radio. It sat on a small living room table.

My Great-Grandpa Morgan also had a wood cabinet radio, but it was smaller yet. It sat on his kitchen table and came on for the KBIZ noon news during lunch only. That was the only time it ever came on.

Grandma Morgan was a very sweet woman, but she a devout member of an Assembly of God Church. There was no TV at their place, and the radio was only for the news. All the other programming was too entirely worldly and sinful for her liking, and this was back before 1963.

KBIZ was the station of choice by most of the adults in my little world. Be reminded that KBIZ was a CBS affiliate for decades, so the musical programming couldn’t get too far from mainstream. They didn’t play rock or country or anything really avant-garde. If not for the songs with vocalists like Bing Crosby, Dean Martin, Dinah Shore, Dorris Day, Frank Sinatra, Perry Como or Tony Bennet, it was pretty much nothing but instrumentals or orchestral numbers.

“Tara’s Theme” from “Gone with the Wind” still got a lot of airplay as did the title song from “Love is a Many-Splendored Thing.” One that really grabbed me even as a child was the Percy Faith version of the theme from “Moulon Rouge,” a film directed by John Huston back in 1952. Another one by Percy Faith was the theme from “A Summer Place.”

“A Summer Place” was released in 1959 and was a scandalous film for its time. These days, it wouldn’t even raise the eyebrow of a nun or a Sunday school teacher. Most of the time, folks still hear Percy Faith, Mantovini and the like on easy-listening stations.

Indeed, Percy Faith is often referred to as the Father of Elevator Music. The Jackie Gleason Orchestra would also fit in that genre. Yes, the Great One was a renaissance man who was able to compose and arrange music despite not being able to read sheet music.

Though most of his recordings were cover songs, “Melancholy Serenade” was Gleason’s own composition and the theme music for his television program of the 1960s. Don’t laugh or make fun. Elevator Music can sound really good on a nice hi-fi system or earphones. The intricacies and texture of that genre are quite astounding when one takes the time and trouble to actually listen to it.

Even on Mom’s little AM radio on our end table, the “Moulon Rouge” theme was other-worldly to me. When that song played, it was like I was transported to some new and wonderful place. Occasionally, you’d hear some Dixieland jazz on KBIZ since Louis Armstrong was still alive and quite popular.

Perhaps the selections would be by swing and big band artists like Duke Ellington, Count Basie, Glen Miller or Benny Goodman. Don’t ask me to remember specific songs I heard then, but I remember the artist’s names very well. The same goes for the all the vocalists mentioned before.

Two numbers I’ll never forget from those days are “Take Five” by Dave Brubeck and one called “The Syncopated Clock.” I’ll speak of my first exposures to folk and country music the next time around.

The day the music was born for young Ottumwan