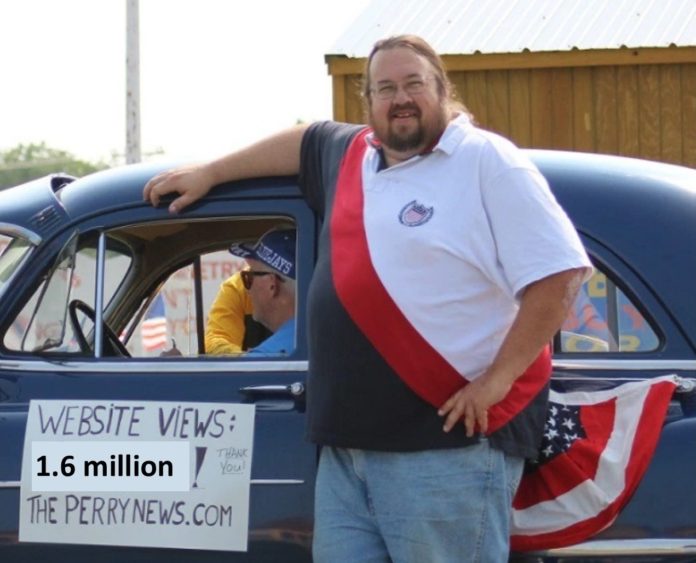 Our good friend Jeff Webster marked the 50th anniversary of his birth June 28, and I want to join with Dan Haymond and Jim Caufield in wishing ThePerryNews.com’s inimitable sports editor a very happy — and nearly belated — birthday.

Webster moved to Perry in February 2005 to work as sports editor of the Perry Chief after 16 years in Marshalltown. He followed in the footsteps of the legendary Harold Bailey and has been a visible and domineering force in the local high school sports scene since his arrival in the community.

Webster is known for his staunchly conservative opinions about both U.S. politics and Catholic Church doctrine, and he loves to defend his opinions against all comers. He also volunteers each Friday afternoon at St. Patrick’s Catholic School, where he reads to the students in the elementary classrooms and is affectionately known and loved as “Mister Webster.”

Webster can regularly be seen in the downtown window of the ThePerryNews.com headquarters at Second and Willis, burning the midnight oil as he produces his up-to-the-minute reports. He is continually working into the wee hours of the night pumping out the latest sports, school-related or breaking news story so that you can see it first thing in the morning.

Needless to say, he is not known as a morning person, unless it be for a few hours after midnight.

Webster is proud of his exotic tastes, and you can regularly see him dining burgers with mounds of pickles while copiously consuming tea, either sweetened or peach. Please join us in congratulating Jeff on reaching this half-century milestone. He loves cakes, cookies, ice cream or any baked goods that you may have on hand.