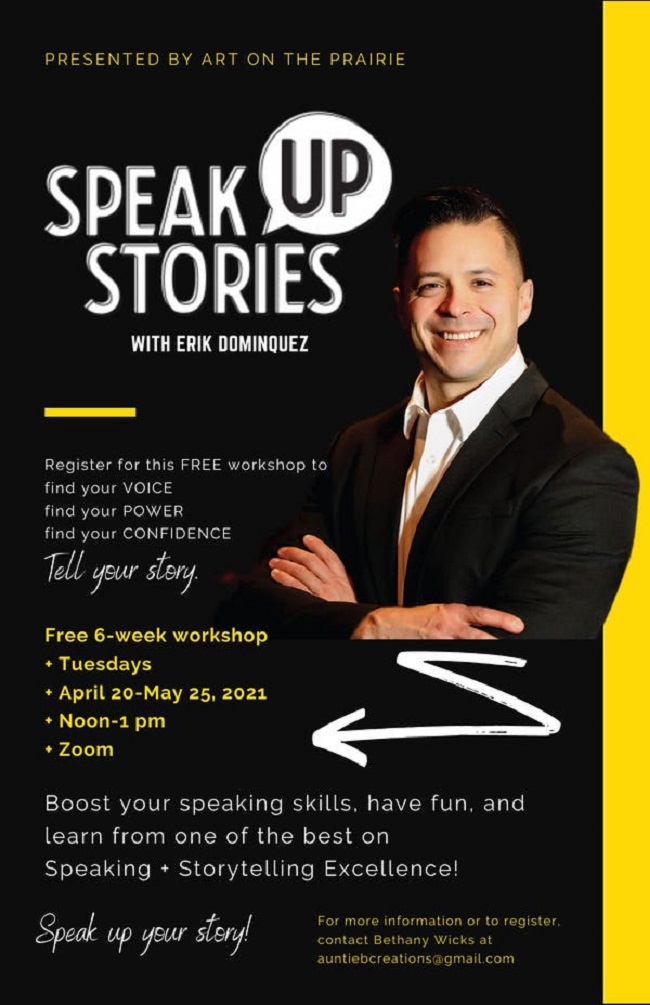 COVID-19 postponed storyteller Erik Dominguez of Waukee’s appearance last fall as Perry’s storyteller in residence, but he is back this spring with his Speak Up Stories workshops, presented by Art on the Prairie.

If you have ever shed a tender tear over a story you heard on StoryCorps or on Paul Harvey’s “The Rest of the Story,” then you know the power of narrative storytelling and the good fit Dominguez will be in his free, weekly, one-hour workshops. The virtual events will be held every Tuesday from April 20 to May 25 from noon to 1 p.m.

To register for the series, email auntiebcreations@gmail.com. Small businesspeople can find their voice, find their power and find their confidence — all for free! — as they boost their speaking skills while having fun and learning from one of the best on speaking and storytelling excellence.

Born in Mexico, raised in Arizona, Dominguez is a public speaking coach and instructional designer at Speak Up Stories. He has taught in the Waukee school district and was a communications instructor at DMACC and Rio Salado College in Tempe, Arizona.

Dominguez founded Speak Up Stories in 2019 in order “to inspire, educate and coach individuals, teams and companies to cultivate a culture of powerful public speaking and storytelling,” according to the Speak Up Stories website.

As an immigrant who grew up between two cultures and heard mixed messages, Dominguez now shares the tools he fashioned to overcome those obstacles. His message is relevant to Perry’s Latinx residents, who make up more than 40% of the town’s population, and to Perry’s white people, who can celebrate the town’s diversity and resilience.

“I didn’t fit in,” Dominguez said in August 2019 at the Des Moines Storytellers Project. “I was not Mexican enough for the Mexicans, and I was not white enough to be white.” A summer speech and debate workshop helped him overcome his insecurities and speak “en los dos idiomas porque mientras se gana algo, se pierde nada,” to speak in both languages ​​because while you gain something, you lose nothing.