The Dallas County Board of Supervisors gave provisional approval last month to a plan by the Iowa Department of Agriculture and Land Stewardship (IDALS) and the Des Moines Area Community College (DMACC) Agribusiness Program to construct a five-acre wetland on county farmland rented by DMACC and used as a teaching farm.

Michael King, DMACC farm manager, said there is an opportunity to create a watershed project on the east side of U.S Highway 169 on the county property. The 5.29-acre wetland would denitrify drainage tile runoff from a watershed of about 261 acres.

“This will help us continue to be good stewards of the ground,” King said, “and it will be an awesome teaching tool for students, and also we could use it for the community, local DNRs and that kind of stuff.”

Shane Wulf, a senior environmental specialist in the IDALS Water Resources Bureau, joined King in presenting the idea to the county supervisors. Wulf said the idea for a wetland on the county farmland sprang up after Travis Lautner, DMACC professor of agribusiness and former manager of the DMACC farm, heard Iowa Secretary of Agriculture Mike Naig talking about the importance of wetlands to flood control and water quality.

Lautner reached out to Iowa Deputy Secretary of Agriculture Julie Kenney, who in turn tasked Wulf with coming up with wetland possibilities on the DMACC farm. Wulf said he installs wetlands, bioreactors and saturated buffers around the state as part of the IDALS water quality program.

“I located one potential site,” Wulf said. “It would be a great water-quality practice and being on a farm that has a lot of students and members of the community come out, I think it would be a really good learning experience for those folks.”

Wulf said he first wanted to find out whether the Board would support exploring whether the site is viable for a watershed. He said he did not need any commitment to a project from the county at this point and that the engineering costs would be paid for by IDALS.

“We’re very, very early on in this process,” he said. “There’s been no engineering at this point, so we don’t know for sure if this is a viable site but before moving forward with the Department of Agriculture, we wanted to get your reaction.”

Wulf said Mike Bourland, a senior environmental engineer in the IDALS Mines and Minerals Bureau, gave the site a cursory inspection and sounded positive about its potential for a wetland.

“Our typical approach on these,” Wulf said, “is we will work with a third-party engineering group and establish a contract to do that preliminary design to see if it is a viable site and then if that were the case, then I would ask to come back to discuss how we move forward from there. But before we get too far ahead, I just wanted to present this idea to you and ask for your support in basically going to see if it is a viable site. There’d be no commitment to the county at this point.”

Supervisor Brad Golightly asked whether the project would be eligible for any cost-share dollars with other agencies.

“Are there cooperators like the Soybean Association and those groups that could use this as a showcase?” Golightly said. Wulf said a plan for sharing construction costs is possible but not for easement payments to the county.

Dallas County owns 526 acres of farmland, woodlands and wetlands surrounding the Dallas County Human Services Campus, the largest such holding of any county in Iowa. The DMACC agronomy department has leased the farmland, barns and stockyards since 2005.

DMACC pays about $60,000 a year to lease 250 acres of cropland, 84 acres of pasture and the various buildings, storage and equipment of the farm. The agribusiness program conducts its weekly labs there, covering farm operations such as planting, harvesting and daily animal care. About a dozen seed companies also grow on a variety of test plots and competition plots on the farm.

In a typical year, the program raises 100 acres of corn and 100 acres of soy beans, with 125 acres given to pasture and hay ground, along with seven rotational grazing paddocks and a small-scale breeding program for six to 12 hogs and 15 to 20 cattle annually.

The DMACC teaching-farm tries to model sustainability and environmental responsibility, King said, with cover crops and other soil conservation practices. The livestock manure is managed by directing the animal waste through a series of wood chips called a biofilter and then into pasture.

Nutrient reduction is the motive for the new wetland, Wulf said. The water from the 261 acres draining into the wetland — not all from county-owned land — would be retarded by “some sort of berm structure toward the bottom,” he said. Larger watershed projects, treating 500 acres or more, often use “sheet pile structures,” Wulf said, but “maybe an aluminum tow wall” would better serve the smaller wetland on the DMACC farm.

“We look at it at a price-per-pound of nitrogen reduction because our goal with these wetlands is to denitrify,” he said. “Normally, when you’re that close to the river, you can’t pick up that many acres, but there’s just this kind of interesting draw to the east there that would provide a pretty decent drainage area.”

The board of supervisors was united in support of exploring the possible viability of a wetland project on county property. Golightly asked how DMACC would use the new wetland as a teaching tool.

“You can see a lot in a video and pictures,” King said, “but to actually have one right there on the farm to take kids to and show them hands-on what it actually does would be a really good tool.”

Wulf also noted the construction of the wetland would give students in the DMACC construction-trades program “a good opportunity to be on site and see what goes into building these things and for future business opportunities for them.”

He said a possible maintenance agreement between the state and county could be addressed in the future if the project proceeds that far.

“I think it’s a tremendous concept to use as a tool,” said Supervisor Mark Hanson, “and the outreach opportunity is especially visible from Highway 169 going north out of there. We’ve got a public responsibility to manage this ground, and you’re helping us do that, so you’ve got a green light to proceed and continue to explore the feasibility.” 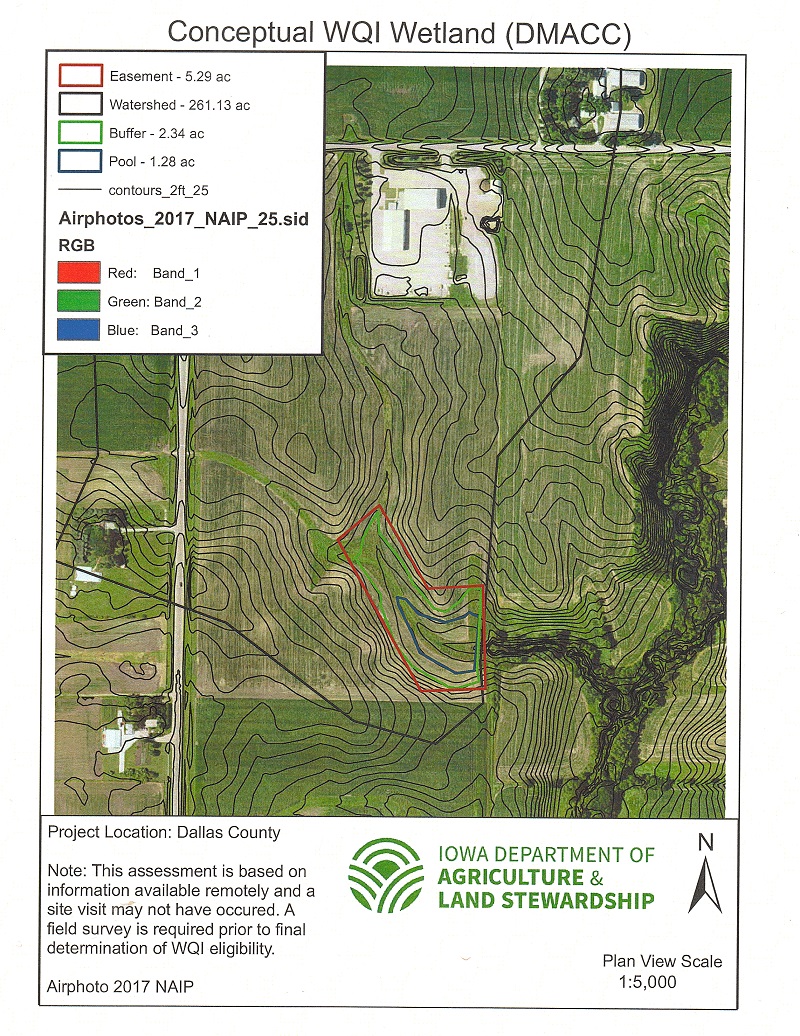