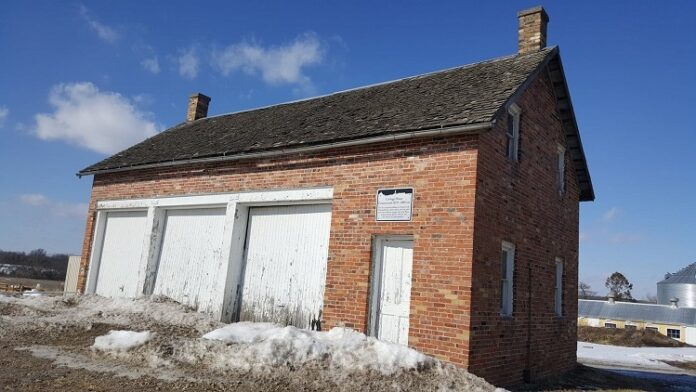 The Dallas County Board of Supervisors has set an April 15 deadline for contractors to respond to a request for proposals (RFP) for the restoration of a coach house, the oldest surviving structure on the grounds of the 152-year-old Dallas County poor farm, now known as the Human Services Campus at 25747 N Ave. on U.S. Highway 169 north of Adel.

According to the RFP, restoration work could entail:

All improvements will have to “maintain the historic nature of the building,” according to the RFP. The historic nature of the coach house probably traces to 1885, when the county supervisors laid out $4,000 to erect “a building for the incurably insane,” which was judged by the editor of the Dallas County News to be “a wise and economical move on the part of the Board and will meet with the hearty approbation of tax-payers of the county.”

According to the newspaper, “The building under contract for creation on the county farm for the use of the insane is to be a two-story building 32×14. It will contain 13 cells, two dining rooms, one tank room, two water closets and two large halls, and will be heated by steam.”

But the coach house might even date to the time of the original buildings on the county poor farm. An 1875 report on the farm by Dallas County Supervisor Lem Warford found the “fences are in good repair, buildings all new and in good order. The dwelling-house is 30 by 45 feet. There are 13 rooms in the house and a good cellar under the house,” according to “The History of Dallas County, Iowa,” anonymously published in 1879 by the Union Historical Co. of Des Moines.

The Dallas County poor farm was established June 9, 1869, with the purchase of 200 acres of farmland from one Cyrus Hemphill, and by 1905 eight more purchases brought the farm to its present extent of 526 acres, making it the largest county farm in Iowa. About 150 acres are covered by timber and wetlands, with the remaining 380 acres given over to corn and soybeans, pasture and hay ground.

The Des Moines Area Community College agronomy department has leased the farmland, barns and stockyards since 2005, using the property as a laboratory for its agribusiness program, which covers farm operations such as planting, harvesting and daily animal care. About a dozen seed companies also grow on a variety of test plots and competition plots on the county farm.

In 1900 a new wing was added to the 1885 building at a cost to taxpayers of $10,000. County voters rejected a bond referendum in 1916 but approved $40,000 of financing in 1928 for an entirely new building, the old “dwelling-house” having “become in a dilapidated and deplorable condition.”

According to Eugene Hastie’s “History of Dallas County,” “During the summer of 1929, a fine new brick structure was built. It is 50 by 100 feet in size, two stories high and connected with the old building by a 50-foot hallway.” The 1929 building is now the main entrance to the Human Services Campus.

Karen Smith of Adel, who administered the Dallas County Care Facility for 32 years after her in-laws, Homer and Effie Smith, had run the place for 27 years, said the old coach house was the last vestige of the county poor farm. Smith said the county originally “built out here on top of a hill because in those days they seemed to think that evil spirits would not be so close to the people if you built on a hill and also because they were closer to God on top of a hill.”