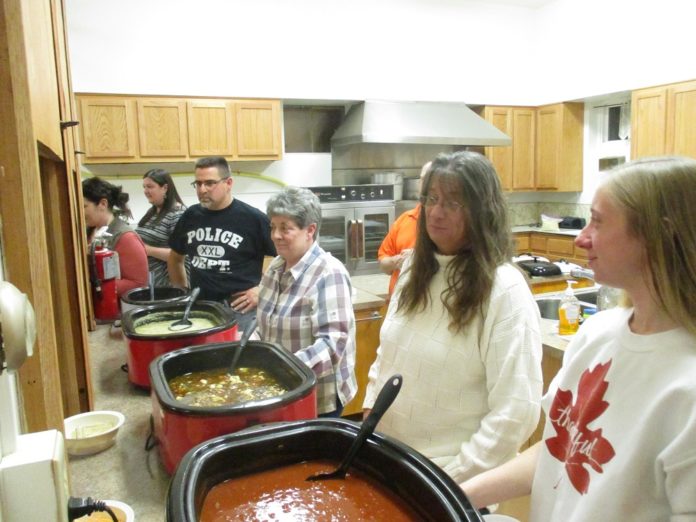 It has been another length of time since I wrote about my further adventures in dining. For the past two weeks, I have been hiding under the counter at Pegasus, surrounded by my stash of bathroom tissue waiting for the COVID-19 virus to get me.

Apparently, the bathroom tissue can protect me. You can’t find this in the stores right now. If other people are buying this out, it must be true.

I have been hearing that drugs that treat malaria are effective in the treatment of the virus. This is being tested in New York. Hopefully, this will be a solution. I know President Trump is eager for a miracle cure or at least a quick fix. If it does not work, it might be a long time before I see another community dinner!

November was a big month for dinners, though they are probably not as numerous as in October but still many. It all started Nov. 1 with the Faith Lutheran Dinner in Adel. This is always a high-quality Thanksgiving-style dinner. I ran across my old AFLAC man. It is good to see people from your past.

On Saturday, Nov. 2 was the Bouton breakfast. It was good as usual, and I like the biscuits and gravy the best. That noon was the Trinity Lutheran Church in Boone’s beef and noodle dinner. They also host a Christmas-themed bazaar, with several baked items and crafts for sale.

The next day, I headed to the Waukee United Methodist Church chicken and noodle dinner. The pastor sat with me and told me that they were building a new church. The church sits in an odd place and has an unusual shape.

Then I headed to the Panther Creek Church of the Brethren soup dinner. I tell you, it is a long way from Waukee. They had chili and potato soup. I just had the chili. I ran across Alice Derry, whom I used to work with. We had a good visit.

On Saturday, Nov. 9 I went to the Polk City OES dinner at the Masonic Lodge. They too were serving beef and noodles. It was a good dinner. I then headed to Cedar Rapids to the gun show at the Hawkeye Downs. I had a holster to pick up from a pistol that I had bought a year before. I ran across another good item to buy.

I then met the man in Des Moines at the fair grounds show and bought a gun from him. Later I found out that he gave me the wrong gun. The gun that I ended up with was nice but not worth as much as the one that I was supposed to get. I do not know if it was a mistake or I was taken.

On Nov. 10, which was a Sunday, I attended with Dan the Adel UMC hamball dinner. We got there close to their closing but got a good meal. That night I went to the Trinity Lutheran Church. I cannot remember what I had and did not get a picture. It was good anyway.

On Wednesday, Nov. 13 I attended the Heartland Church of Christ Dinner in Perry. They had a Thanksgiving-themed dinner. I visited with several people and then moved on.

Nov. 16 brought the Rippey Lions Club breakfast, including pancakes with other favorites. I visited with many people from the church. Most of the Rippey Lions also attend the United Methodist Church in Rippey and work those dinners, too. That night Dan and I attended the Woodward Christian Church hamball dinner.

On Saturday, Nov. 23 Dan and I headed to the Penn Center United Methodist Church soup dinner, with about 18 soups to choose from. It is always a good meal and out in the middle of nowhere.

On Nov. 27 I attended the EDGE youth group of the Perry First Christian Church before the turkey soup dinner. I had several soups and got caught up with Susan Stone, whom I used to work with. Later I attended the Perry Ministerial Association Thanksgiving service. You can see this on Pegasus Cable Channel 12, now really 121-1.

I attended other dinners later and have more to tell you, but I hope that this little story breaks up your monotony. Not much else going on for ThePerryNews.com to tell now that the economy is collapsing and everyone is ordered to stay home.

Make sure to support our local restaurants. They are hurting and would appreciate your carry-out business. Pray for us to get back to “normal.” Please pray for me. See you next time.