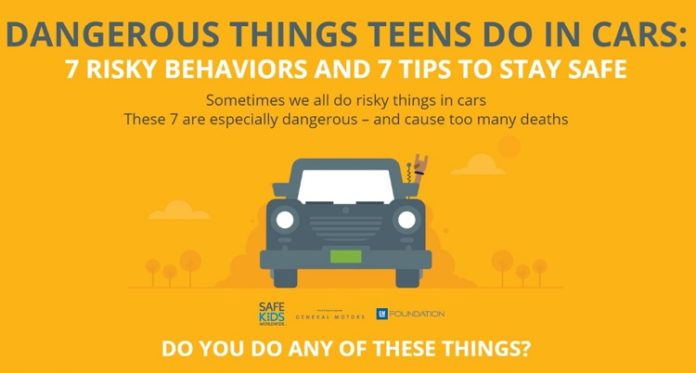 DES MOINES — This week and every week, parents should have conversations with their teens about the important rules they need to follow in order to stay safe behind the wheel. These rules address the greatest dangers for teen drivers: alcohol, inconsistent or no seat belt use, distracted and drowsy driving, speeding and number of passengers.

Alcohol: In 2015 almost one out of five teen passenger-vehicle drivers involved in a fatal crash had been drinking. Remind your teen that driving under the influence of any impairing substance, including illicit or prescription drugs, could have deadly consequences.

Seat Belts: Wearing a seat belt is one of the simplest ways for teens to stay safe in a vehicle. In 2015 a total of 531 passengers died in passenger vehicles driven by teen drivers. Fifty-eight percent of those passengers were not wearing their seat belts at the time of the fatal crash. Even more troubling, in 84 percent of cases when the teen driver was unbuckled, the passengers were also unbuckled.

Distracted Driving: Distractions while driving are more than just risky. They can be deadly. In 2015 among teen drivers involved in fatal crashes, 10 percent were reported as distracted at the time of the crash.

Speeding: In 2015 almost one-third (29 percent) of all teen passenger-vehicle drivers involved in fatal crashes were speeding at the time of the crash.

Passengers: Research shows that the risk of a fatal crash goes up in direct relation to the number of passengers in a car. The likelihood of teen drivers engaging in risky behavior triples when traveling with multiple passengers.

Drowsy Driving: Teens are busier than ever — studying, extracurricular activities, part-time jobs and spending time with friends are among the long list of things they do to fill their time. However, with all of these activities, teens tend to compromise something very important: sleep. This is a dangerous habit that can lead to drowsy driving.

In 2015 we lost 52 young drivers in Iowa under the age of 21 in motor vehicle crashes. The Iowa Department of Public Safety and the Governor’s Traffic Safety Bureau encourages adults to talk to teen drivers about safe driving practices. Losing even one is one too many, don’t you think?

For more information, call Todd Olmstead, youth coordinator with the Governor’s Traffic Safety Bureau, at 515-725-6122. Statistics in this article were provided by the National Highway Traffic Safety Administration.