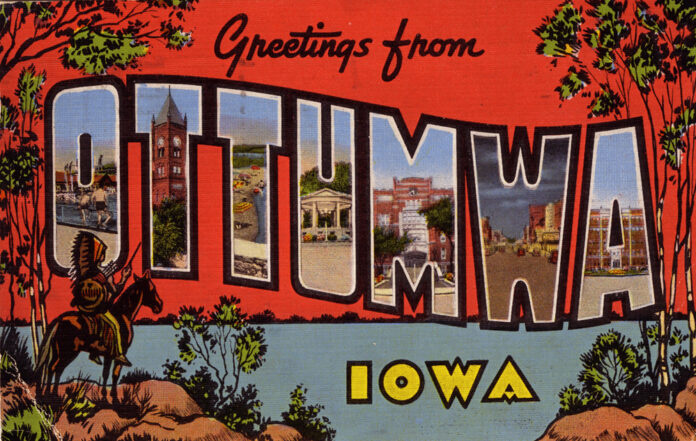 The first songs I can say I definitely remember were played on the old KLEE AM station of Ottumwa. I was no more than 3 or 4 years old when I heard the 1950’s rock sounds of Bill Haley, Buddy Holly and Jerry Lee Lewis.

My mother and I were living in an apartment on E. Main Street, and I distinctly recall our little radio being on a living room end table. I could figure out how to turn it on and adjust the volume, but I just didn’t have the knack for tuning in the other channels for quite some time. I accepted my limitation and merely left it on KLEE. If it was already tuned to something else, I had the good sense to just leave it there.

Eventually, I learned Ottumwa had another station. KBIZ AM was a CBS affiliate. It took me a few years to learn some of the news broadcasts on KBIZ were not from Ottumwa. The long and the short of it was we could only usually pull in one of those two stations. With nothing else but static, I eventually figured out how to dial from one of those two stations to the other.

The choices were even more limited for TV as we could only get Channel 3 KTVO, and that required properly adjusted rabbit ears. I learned there were these wonderful gadgets called antennas you could mount on your roof to receive alternate stations, but Mom and I couldn’t afford one of those.

Needless to say, we had a tiny black and white TV. Most of the network programming was in black and white anyway, this not changing until the late ’60s. We had to settle for two radio stations, one TV channel and being on a telephone party line. For the young folks not familiar with the latter, we had to share the same phone line with others. If the phone rang loud, it was a call for us. If it rang soft, it was for some other folks.

Of course, I could be a sneak and try to eavesdrop on the conversations of others but if I got caught, I would be punished. The other folks could usually hear a sort of click when you picked up the receiver. The thing about the party lines was they were on an honor system.

Then there were record players. We didn’t have one. Besides, most folks I knew owned nothing more than the portable ones. Their width and length were just large enough to accommodate the old 33 RPM LPs. They were essentially a square hinged box that you’d snap shut when you weren’t using it. Their controls were nothing but an on-off/volume knob and a lever you could set at 33, 45 or 78 RPM.

That was the extent of the electronic media when I was a little one. But I digress. My main subject here is music.

I remember hearing Elvis early on, but he just didn’t appeal to me. Most of the kids I knew were nuts about him, particularly the girls. For the life of me, I couldn’t figure out why he was supposed to be such a big deal. I had some girl cousins a few years my senior who were absolutely smitten with Elvis.

I did like some of the movies he was in when I got older, that is, about when I was around eight or nine. My family and I enjoyed seeing them at the old Ottumwa Drive-In Theater. We saw most of those old, silly beach movies with Frankie Avalon and Annette Funicello, too.

I’m reminded now of how Frankie Avalon, Pat Boone, Bobby Vinton and the other crooners supplanted the edgier rockers. Elvis was in the U.S. Army two years. Little Richard went to Bible school. I didn’t know it then, but Chuck Berry wasn’t so visible for a while due to legal issues. Jerry Lee scandalized himself and I really didn’t understand that kind of thing yet either.

Of course, the real kicker was the death of Buddy Holly. I vaguely remember hearing about it on the TV news, but I really didn’t have the concept of death down yet. The only people who died were the bad guys on TV. Very unlucky folks died, too. It never really occurred to me that everyone dies.

It all came down to the rockers who frightened all the parents were off the scene and the clean-cut smoothies moved in. I reckon Connie Francis made the scene about that time, too, along with the aforementioned clean cut dudes.

Just like Elvis, I was clueless on why people were so taken with them. They did nothing for me. My dad’s two youngest sisters were in their teens then and were totally flipped out by some of those guys. They were into Bobby Vinton particularly. I was only 4, maybe 5, and I just didn’t get it.

I’ll come back to it later, but that’s enough about pop music and what passed for rock at the time. Besides, this is a good place to stop for now. Barring anything unforeseen, I should have another installment for you all in another week. Thanks for indulging this old Long Hair.