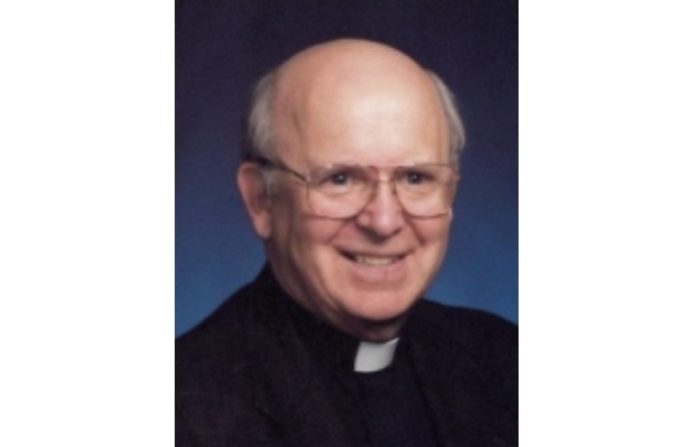 A funeral Mass at St. Ambrose Cathedral will be celebrated at a later time.

In July 1964, Fr. Pfeffer was appointed chancellor of the Des Moines Diocese, a position in which he served four bishops.

Beginning in 1979, he served as pastor over the next 20 years in three parishes; “Pfeffer’s Pflock” Sacred Heart in West Des Moines, St. Patrick Church in Council Bluffs and St. Joseph Church in Winterset.

In July 2000, he began retirement from the active ministry and began what is sometimes referred to as the inactive ministry. In this case, it gave him the opportunity of serving as a volunteer at the Iowa Correctional Institution for Women at Mitchellville. There he offered Mass monthly, at Christmas and Easter and participated biannually in Residents Encounter Christ (REC) for 13 years before retiring a second time.

Fr. Pfeffer prided himself on never having had an unhappy year in his active ministry. His fellow priest countered, however, that the happiest of his years were during and after the Vatican Council II.

Fr. Pfeffer leaves behind his brother, Jim (Lynn); sister, Janet Fiala; nine nieces and nephews; and 22 great-nieces and great-nephews. He looks forward to the Grand Reunion in Heaven with all who have gone before, especially his Mom, Dad, brother, Fr. Tom and baby brother, Gerald.

Memorials may be made to the Priests Pension Fund c/o the Diocese of Des Moines, 601 Grand Ave., Des Moines, IA 50309.