DES MOINES, Iowa — With COVID-19 sweeping through the nation’s meatpacking workforce and forcing many of the country’s largest processing plants to cease operations temporarily, U.S. President Donald Trump signed an executive order Tuesday under the Defense Production Act to compel meat processing plants to remain open during the coronavirus pandemic.

According to the Iowa politicians, “pigs are backing up on farms with nowhere to go, resulting in overcrowding and animal welfare issues. At current capacity levels, there are 700,000 pigs across the nation that cannot be processed each week and must be humanely euthanized.”

This “depopulation” of herds results from a bottleneck in the production process caused by the closure of slaughterhouses after thousands of employees across the country began testing positive for the COVID-19. A spokesperson for the United Food and Commercial Workers union, which represents meat plant workers, said Tuesday at least 17 workers have died from the virus and at least 5,000 have been directly impacted.

In their letter, the Iowa leaders called on the federal government to keep the packinghouses open, pay livestock producers for culling their herds and shield corporate meat processors from legal action by “activist organization” that agitate on behalf of animal rights.

“We strongly urge that farmers are indemnified for their euthanized hogs, including costs associated with depopulation and environmentally sound disposal, to help preserve Iowa’s pork industry,” the foursome said in their letter to Pence. “Pork producers also need protection through legal immunity from attempts by activist organizations to penalize producers who are required to take these actions to protect the welfare of their animals.”

Trump’s order also provides companies with additional liability protections in case slaughterhouse workers get sick. According to an Associated Press report, Trump described the issue Tuesday as a “legal roadblock” and said his order would “solve any liability problems where they had certain liability problems and we’ll be in very good shape.”

Gov. Reynolds praised Trump’s use of the Defense Production Act in order to classify meat processing plants as essential critical infrastructure that must remain open, and she defended the state’s meat processors’ efforts to protect worker health.

“Meat processing plants are a critical part of the food supply, and I support President Donald J. Trump taking action,” Reynolds said Tuesday. “What I’ve seen, our processing plants have done everything that they can and continue to work to make sure that their employers are working in a safe environment. I’ve talked to almost every one of them many times, and they’ve talked about through temperature scanners, through opening up their attendance policy, to making sure that they’re practicing social distancing, to mandating facial masks, many times shields, to putting in partitions, to make sure that their workers know that they can stay home when they’re sick — so they are being proactive to doing what they need to do to protect their workers, to make sure that they’re operating in a safe environment, and then we’re helping, too, with some of the testing, so that we can identify those that have tested positive. We’re doing diagnostic testing as well as serology testing on many of these facilities so that we can really identify the scope and the spread and hopefully do everything we can to keep these facilities up and running because it is essential that we not only protect the workforce but that we keep our processing plants open so we can keep the food supply chain moving, or we’re going to really be dealing with some significant issues going forward, not only from a food-supply protein effort but really even the cost of food as well, so we’re working collaboratively and collectively to make sure that doesn’t happen and it goes to, you know, our producers and our farmers, who have invested in feeding not only Americans but the world, and so they show up every day as well as our food processing workers to make sure that that food supply chain continues to move, and Iowans and Americans continue to have access to protein and food going forward.”

Spokespersons for the meatpackers unions and agriculture-reform groups were skeptical of the motives for Trump’s intervention on behalf of the protein corporations.

“This is really about the profits of Big Ag and not the food supply,” said Diane Rosenberg, executive director of the Iowa Alliance for Responsible Agriculture. “If it were about the food supply, an efficient and citizen-centered government would quickly and creatively find ways to set up temporary lockers to locally process animals and distribute the meat locally rather than euthanize millions of animals at the CAFOs. This is just about keeping big profits in Big Ag’s pockets, and the health and lives of the slaughterhouse workers be damned.”

At the Tyson Fresh Meats plant in Perry, production workers have been idled while awaiting results of virus tests administered Saturday. According to a Tyson text message to employees, “The Union and Company have agreed to pay a guarantee for this week.” 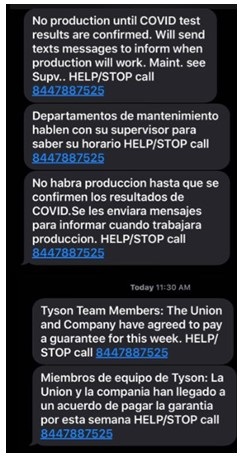