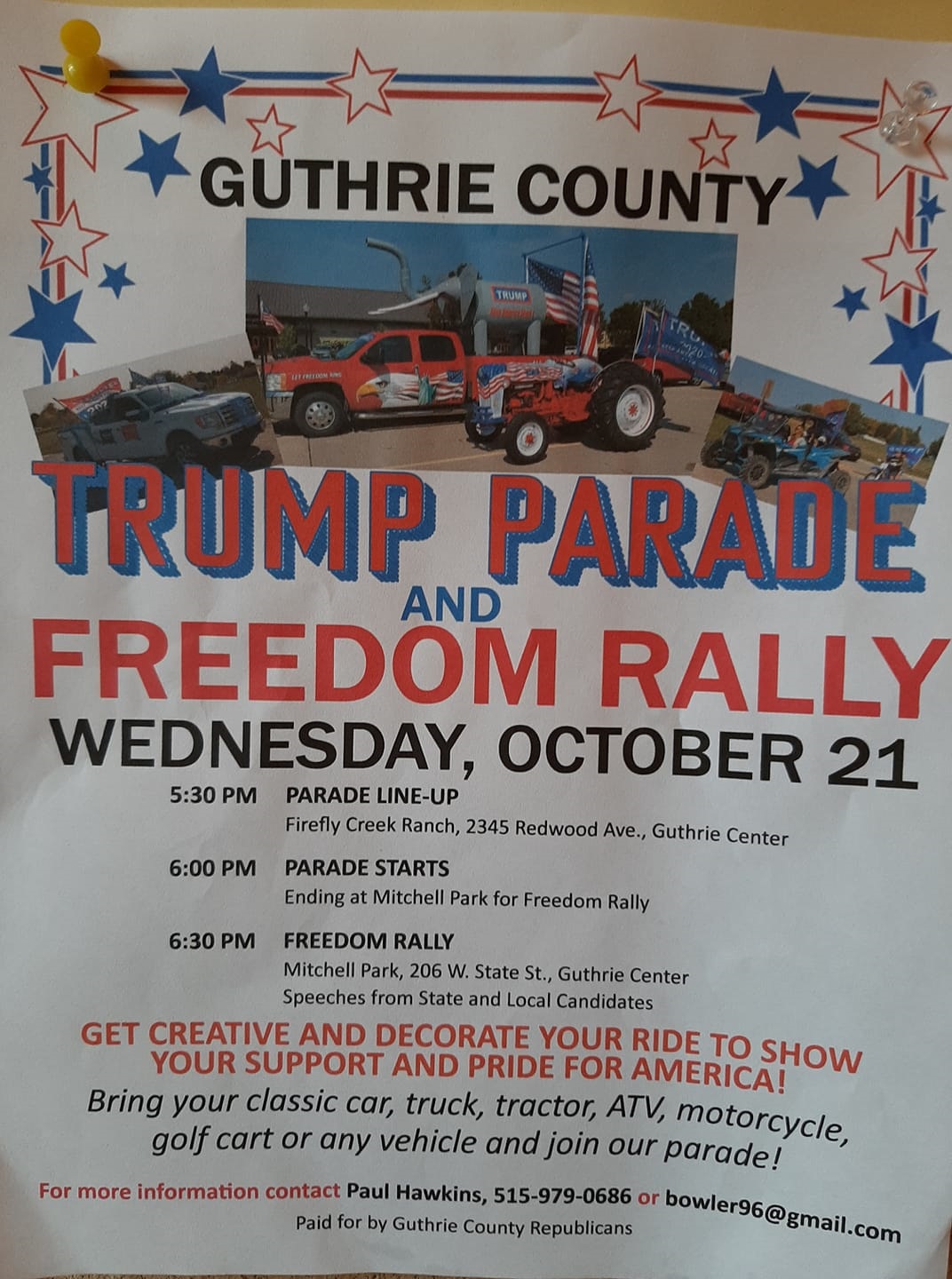 Supporters of the reelection of President Donald J. Trump will have a number of parades to choose from next week in order to show their partisan loyalties.

The Guthrie County Republicans will sponsor a parade Wednesday Oct. 21, with a 5:30 lineup at the Firefly Creek Ranch at 2345 Redwood Ave. in Guthrie Center and proceeding to Mitchell Park at 206 W. State St. in Guthrie Center, followed by a freedom rally, with state and local speakers addressing the Trump supporters.

Paraders are encouraged to decorate their classic cars, trucks, tractors, ATVs, motorcycles, golf carts and other vehicles “to show your support and pride for America.”

Sunday, Oct. 25 will see a longer route for the Patriot Parade, hosted by David Crooks and Ldc Carpenter of Perry. The event is not paid for by the Dallas County GOP.

The route will begin in Perry and then go south or west, with several possible stops, according to the event’s Facebook page.

According to the patriots’ event post: “Show your support for President Trump and our Wonderful Police, Military, and First Responders!! We are starting in Perry at Stokley lumber(map directions below) and going to drive down through Adel and maybe to Winterset, bring your Cool Cars, Trucks, Farm Trucks, Harley’s, Helicopters, Space Shuttles. . . . we’ll be playing patriotic music on a flatbed trailer. Bring all your Trump gear, we will have hats, shirts and flags available, in limited supply, we will be staging from 12:30 to 1:00 please share with your PATRIOT FRIENDS !!!! LETS HAVE FUN AND BE SAFE, NO COMMIE BASTARDS or BLOOD SUCKERS ALLOWED !!!!!!”

Another portion of the Perry patriots’ Facebook event gives a different route: “We will gather at Stokley Lumber, probably leave about 1:00 we will leave to the east and make a loop back to first street on 141, and then back down 1st and east on Willis to run through town once, then leave Perry to Adel exit and south to Adel, we will go south out of Adel and make a stop in Desoto just south of the Interstate, then we will leave Desoto and head south to 90 and go west making a stop on the overpass of I-80 to wave some flags! Then we will head west to Stuart and up through to Panora making a stop a Casey’s in Panora, then back on Hwy4 up to Yale and through Yale to Jamaica to our last stop at Just One More in Jamaica, where Chad will have the grill going, he will have Hamburgers, and Brats, and BEER, I believe it’s a cash only bar so make sure to bring cash, their is a ATM available at the bar.”

Crooks sells Trump paraphernalia, which will also be available.

Monday, Oct. 26 will bring the Trump Train Parade Trifecta in Adel at 5 p.m.

Air quality advisory in effect until Monday at noon