Eli Saemisch and Zach Thompson were crowned champions while Gisaveri Niyibizi and Jacob Thompson suffered narrow losses in the finals of their respective weight classes at the Raccoon River Conference tournament Saturday.

Saemisch continued his stellar senior season by improving to 43-8 in winning the 170-pound division. He was one of only four wrestlers to record three pins in the tourney, doing so in a third-fastest combined time of only 6 minutes, 24 seconds.

He opened with a pin of Eden Dearden (B-F) in 2:22, then needed just 1:21 to pin Ben Lee (BAL). An emotional Saemisch jumped to his feet and clapped his hands once after putting Travis Johnston’s (CRL) shoulders to the mat in 2:41 in the finals.

He received a first-round bye, then needed just 42 seconds to pin ADM’s Hogan Hopewell in the semifinals, with a 3-2 decision over Ballard’s Skley Noftsger giving the sophomore the title of conference champ.

Niyibizi (18-2) wasted little time in reaching the finals, using only 27 seconds to pin Devon Schweitzer (CAR) and 1:35 to stick James Runestad (BNE) to set up a rematch with Ballard’s Tate Battani, who Niyibizi had defeated, 11-5, Thursday. Unfortunately for the Bluejay senior, the Bomber matman was able to earn revenge with a 5-4 win to take the RRC title at 126.

Also reaching the finals was Jacob Thompson (29-9) at 145. Thompson pinned both Tyler Squires (CRL) and Justin Smith (WNT), in 4:19 and 1:19, respectively, but suffered a closely-fought 9-7 decision to Carroll’s Sam Kastle to finish as runner-up.

The top two finishers in each weight class will advance to the District 8 tourney in Webster City Feb. 13, where they will face the champion and runners-up from the Garner Sectional 15 tourney, which includes Algona, fourth-ranked Clarion-Goldfield-Dows, Forest City, Humboldt, Webster City and host Garner-Hayfield-Ventura. 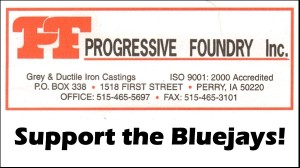