Investigators with the Perry Volunteer Fire Department know where the fire broke out early Wednesday at 1215 Second St. in downtown Perry, but they have not determined what ignited the blaze.

Thanks to a timely 2 a.m. report made by Robert Lee Knisley of Perry of heavy smoke coming from the rear of the building and a prompt response by the Perry Police Department and the Perry Volunteer Fire Department, the blaze was quickly controlled and contained.

According to a report issued Wednesday morning by Fire Chief Chris Hinds, “The fire was located in the southeast corner of the block addition against the rear brick wall of the original building.” 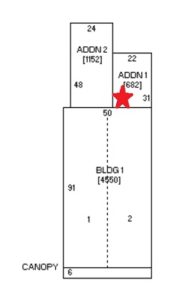 Hinds said the fire department’s “initial attack” was made through “a steel walk-in door” opening onto the alleyway west of the property.

The investigation concluded the fire started where “shelving units” stood with “cans of mineral spirits and varnish along with floor sealer that was most recently used to refinish the hardwood floors in the building,” the report said.

Hinds said there was “no source of ignition present, such as electricity or some other means to start the fire, other than the possibility of used rags saturated with mineral spirits” and other matter that “could have been ignited through spontaneous combustion, although this is merely speculation at this point and has not yet been confirmed as the fire remains under investigation.”

Twenty PVFD volunteer firefighters responded to the incident. Minor injuries were sustained by one firefighter who fell on the scene and bruised his ribs and by another who cut his finger on a hose coupling and required three stitches. The report said both are doing fine.