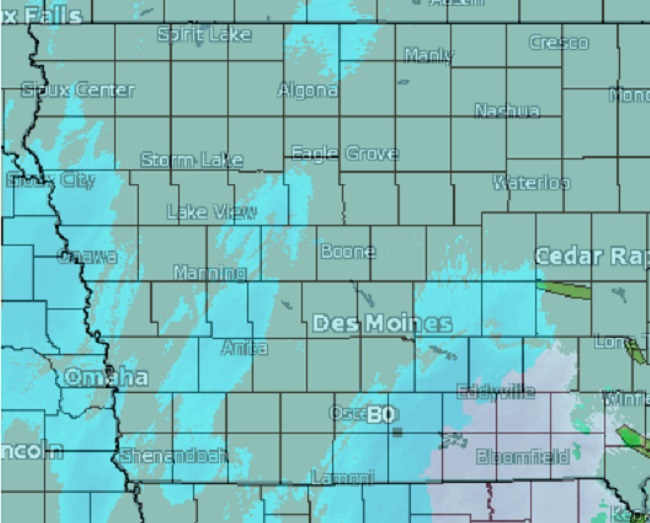 The National Weather Service office in Des Moines has extended a winter weather advisory until 6 p.m. Thursday as another winter system affects much of central and northern Iowa with a combination of freezing rain, freezing drizzle and snow.

A band of moderate freezing rain, sleet and snow passed over central Iowa early Thursday morning, with freezing drizzle and light snow or flurries prevailing by 4 a.m. The next round of heavier precipitation is over northern Missouri and will be moving into Iowa before sunrise.

The NWS said the precipitation will spread freezing rain perhaps mixing with sleet over southeast portions of Iowa, with significant ice accumulations still possible in this area through midday Thursday. Farther to the north and west, any lingering freezing drizzle will change to snow and then spread eastward this morning.

Wind chills as low as 25 below zero could cause frostbite on exposed skin in as little as 30 minutes later Thursday and into Friday morning.

There will be breaks and periods of lighter precipitation during the 24-hour event, the NWS said, but the combination of a frozen mix and moderate ice and snow accumulations will make for difficult travel. The slippery roads could impact the morning or evening commute.

Following the storm Thursday night, another round of Arctic cold will invade the region.

The latest road conditions can be obtained by calling 5 1 1. ThePerryNews.com will update this weather story as forecasts evolve.