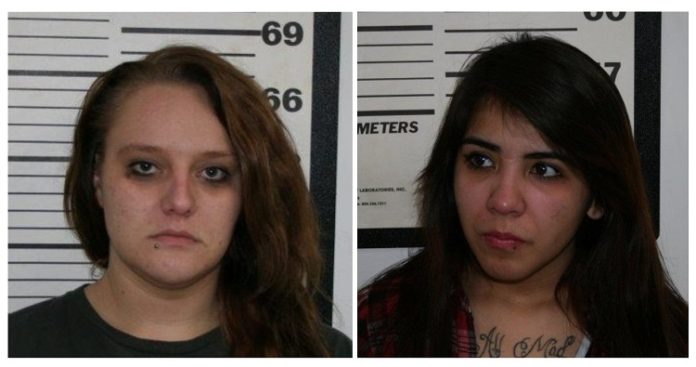 Paloma Perez, 19, of 2017 Otley Ave. and Haylee Rote, 21, of 302 Warford St. are each charged with first-degree theft, eluding and accessory to a felony after fleeing a traffic stop at W. Third and Warford streets about 10:15 p.m. in a 2016 Toyota Camry with Texas license plates.

According to a statement released Wednesday morning by the Perry Police Department, “The vehicle then turned east on 195th Street. Before it turned east on County Road F31, the suspect vehicle left the road briefly on 195th but the driver was able to drive out of ditch.”

The chase ended in Minburn when the fugitive vehicle “failed to negotiate a curve at Walnut and First Street and entered a field, where it became stuck,” the police statement said.

Siekiewicz and officers from the Dallas County Sheriff’s office took Perez and Rote into custody at gunpoint, where their behavior at the scene of the arrest was described in radio traffic as “non-compliant.”

“It was then discovered that the vehicle had been reported stolen from Des Moines in December,” police said. “Rote had been operating the vehicle at the time it stopped. No injuries were reported to either the suspects or officers. The subjects were transported to the Perry Police Department for processing and then later transferred to the Dallas County Jail.”

Rote and Perez are each held on $10,000 bond at the Dallas County Jail.