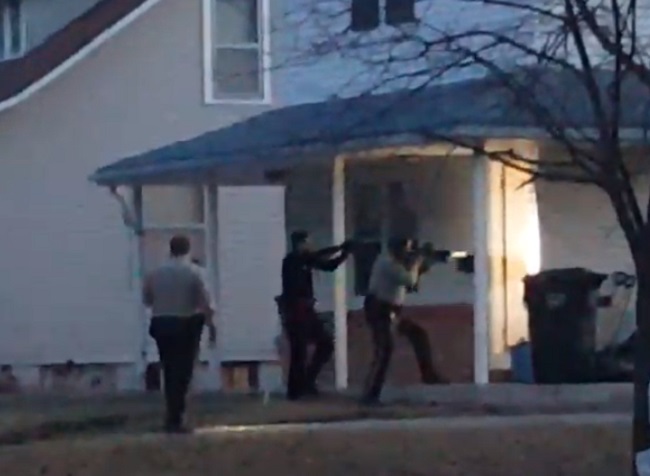 Three Perry juveniles face first-degree harassment charges following a Friday evening incident in which they allegedly threatened to kill a 12-year-old girl and the dog she was playing with.

The incident began when a caller to the Perry Police Department reported at 7:05 p.m. that three juveniles “were harassing his child” near Third and Estella streets in Perry. The caller reported the harassers “threatened to kill their dog” and said “that they’d be back with weapons and guns.”

The father who lodged the complaint told ThePerryNews.com that his 12-year-old daughter’s best friend, “who is also 12 years old, was playing outside in front of the apartment with our dog. The three boys came by and told her they were going to kill the dog. Then the neighbor came out and told the boys to leave her alone, and they started cussing out the neighbor with a lot of derogatory statements. As they continued down the street, they said they were going to kill my daughter’s best friend and the dog.”

The father said he walked out of his apartment about 30 minutes later, “and the girls are like, ‘There’s the boys.’ So I walked out and said, ‘Are you guys threatening my kids?’ That’s when they started in. What it was they said, they got weapons at home and are going to come back and destroy my vehicles, kill the kids, kill the dog and kill me.”

The man said he was not too concerned about “three punk kids” until they said they would return and harm the children. Then he called the Perry Police Department.

Officers responded and made contact with a group of three or four juvenile males near Seventh and Estella streets.

The officers appeared to converse calmly with the youths even as the youths appeared to verbally abuse the officers. For reasons unknown, the boys later became “uncooperative,” according to the Perry Police Department call log.

At least one boy resisted detainment alongside a police patrol vehicle while another boy fled the scene on foot with an officer in hot pursuit. He was later taken into custody at gunpoint by a Perry Police Department officer with assistance from two Dallas County Deputy Sheriffs.

In the end, a 14-year-old male, a 15-year-old male and a 16-year-old male were each arrested on charges of first-degree harassment. The youngest and eldest boys were also charged with four counts each of interference with official acts.

The father who reported the alleged harassment said he took the teens’ threats seriously.

“The kids said they had guns at home,” he said. “They said they had an AK at home. They said they had some nine millimeters at home. And it was as they were walking away that they started screaming, ‘We’re going to come back with our guns and kill you.’ So when I called the police, I said, ‘Look, these kids are threatening that they’ve got guns at home.’ I don’t know if these are some gangbanger kids who really have access to that or not. You hear about kids actually getting guns and shooting people. It’s like, well, if these kids actually show up with a gun, I’m going to be in a fix.”

It is unknown at this time whether any weapon was recovered by law enforcement. A parent of one of the arrested juveniles was unhappy the arrests were reported in ThePerryNews.com.

“I don’t appreciate you posting my 15-year-old being held at gun point all over Facebook,” the mother told ThePerryNews.com. She said she found the report “disgusting.”

The father of the girls said he was instead disgusted by the behavior of the teenage boys.

“I came out here to get peace for my kids,” he said. “I actually moved out to Perry back in October to get away from Des Moines and issues like that.”