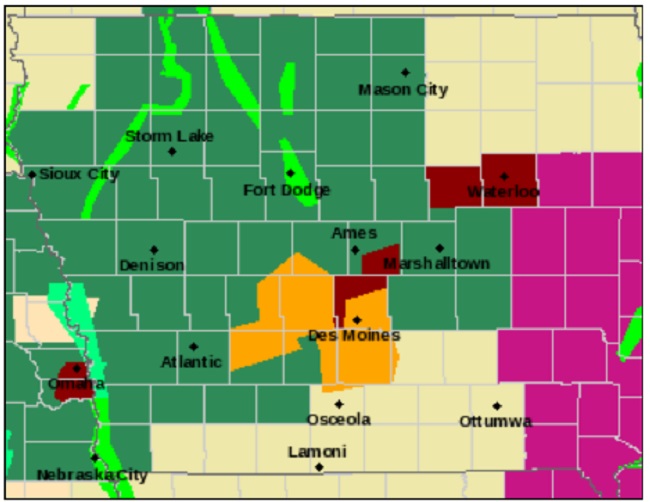 Additionally, a flash flood warning is in effect until 2:15 a.m. Sunday for Dallas and Polk counties.

At 9:07 p.m. severe thunderstorms were located along a line extending from near Panora to 10 miles northeast of Stuart to near Earlham, moving northeast at 30 mph.

Winds of up to 50 mph are predicted. Expect damage to roofs, siding and trees.

This area includes U.S. Interstate 80 between mile markers 87 and 121.

The flash flood warning remains in effect until 2:15 a.m.

At 8:59 p.m. trained weather spotters reported flash flooding across Polk and Dallas ccounties. Numerous roads have water over them, and creeks and streams are flowing out of their banks.

Up to four inches of rain have already fallen. Flash flooding is already occurring and the severity is likely to increase. Law enforcement radio traffic for Dallas County confirms many roadways are flooded.

Additional rainfall amounts of one to three inches are possible in the warned area.

Flood waters are moving down Four Mile Creek from in and around Ankeny to Easton Boulevard. The flood crest is expected to reach 15.3 feet around 4 a.m. Sunday.

ThePerryNews.com will update this weather report as information becomes available.