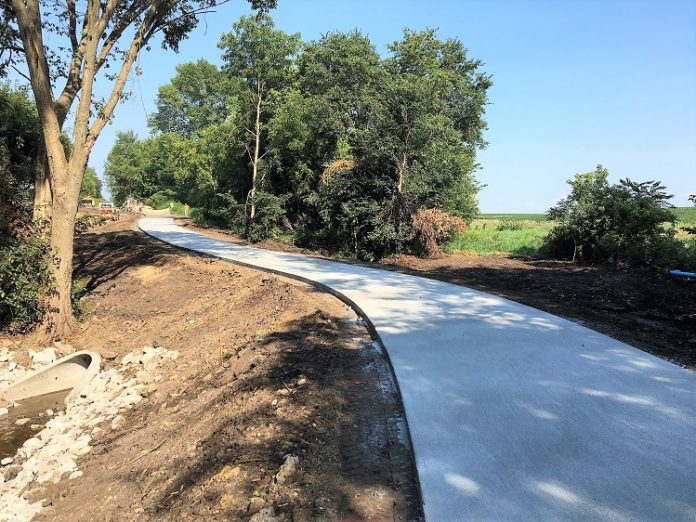 Earlier this summer, Tate Boyd of Urbandale celebrated his half-birthday in a unique way. In lieu of gifts, the now 10.5-year-old requested donations for the new bike trail being built between Perry and Woodward. The thoughtfulness of the gesture was matched twentyfold throughout the remainder of his birthday month.

“I knew the trail community would rally behind Tate,” Wallace said. “Let’s keep the momentum rolling as we connect the Raccoon River Valley and High Trestle Trails.”

One Dallas County Conservation Board supporter was so inspired by Boyd’s donation that the supporter replicated the fundraising efforts for another birthday. A social media campaign with friends and family brought in $1,400 from numerous contributors.

A $5,000 check at the end of the month helped boost the overall total to nearly $7,000 for the Let’s Connect Trail Project. While Raccoon River Valley and High Trestle Trails are two of Iowa’s premier trail systems, the new connector trail segment will link these networks. The paved paths are popular with bike riders and also provide recreational opportunities for runners, walkers, skiers, and skaters.

The first phase of this $5 million construction project is nearly complete, with crews finishing the initial 1.5 miles of trail starting in Perry and working eastward. The conservation board plans to open this segment in the coming weeks.

Phase two, slated to begin in 2019, will start in Woodward and work westward. The entire nine-mile route has been mapped out, and easements are in place, and the project will continue to move forward as funding comes in.

If you would like to support the project, contact the Dallas County Conservation Board at 515-465-3577 or visit online at www.dallascountyiowa.gov/conservation or www.letsconnectdallascounty.com.

Ken Keffer is the outreach coordinator for the Dallas County Conservation Board.