Maybe every presidential candidate campaigning in Iowa should be required to speak from or at least spend some time wandering through the beautiful Cowles Commons at Third and Locust streets in Des Moines and pondering the 10 peace quotations found among the native perennials and trees. 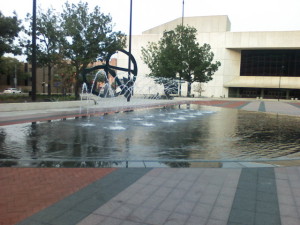 There’s something for politicians and non-politicians alike to enjoy at Cowles Commons–the Lauridsen fountain with its dancing waters lit by colored lights, the classic Crusoe Umbrella designed by Claes Oldenburg and Coosje van Bruggen, the thought-provoking quotations and the beautiful trees and grasses.

Coming this October is the Jim Campbell stainless steel sculpture with more than 10,000 LED lights suspended in the air. Here is a video of the work in progress.

The space is meant to serve, according to Des Moines Performing Arts, as “a new vision for the benefit of all citizens and visitors of Des Moines – to create a world-class cultural and urban destination. Des Moines Performing Arts (DMPA) brought together the design team and the fundraising necessary for the creation of a distinctive public place to serve as our civic town square and further enhance the metro’s quality of life.” 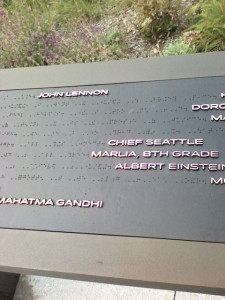 Some fun facts about Cowles Commons: the seat walls where the peace quotations are inscribed have stainless steel leaves atop them to deter skateboarders; the peace quotations are included in a braille plaque near the Peace Rock in the southeast corner of the commons; and the Peace Rock is one of the pieces remaining from Nollen Plaza, the space’s previous name. Nollen Plaza opened in 1979.

Ken Smith, the project’s primary landscape architect, is a Waukee native and an ISU graduate. He is now based in New York City.

The project cost more than $12 million. The Gardner and Florence Call Cowles Foundation was a major funder of the project, with significant support coming from the Principal Financial Group, William and Susan Knapp, the Lauridsen Family Endowment, the Kruidenier Charitable Foundation, Vision Iowa, the City of Des Moines, Prairie Meadows, Wells Fargo and the Polk County Board of Supervisors.

All the supporters who made this beautiful public area a reality deserve our thanks.

While I wholeheartedly recommend a visit to Cowles Commons, the 10 thought-provoking quotes from a wide spectrum of people are provided here for your consideration:

Cowles Commons is located at 221 Walnut St. in Des Moines and is open Monday through Friday from 9 a.m. to 5 p.m.