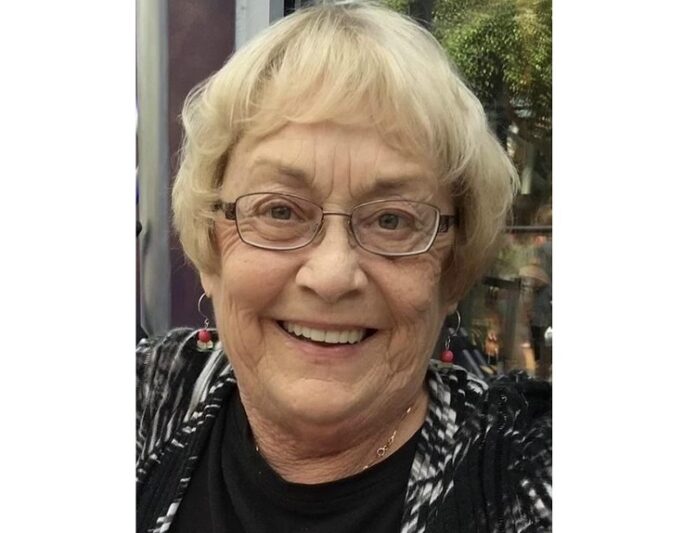 Memorial services for Wanda Taylor, 79, of Perry will be 11 a.m. Friday, Sept. 10 at Mt. Olivet Lutheran Church in Perry. Burial will be in Sunny Hill Cemetery in Grimes, Iowa. Visitation will be from 5-7 p.m. Thursday, Sept. 9 at Murdock Funeral Home.

Wanda Louise Taylor entered this world April 16, 1942, the daughter of Darlene and Daniel “Pat” Taylor. Wanda was born in Des Moines, Iowa, and grew up in rural Dallas County, near Minburn.

Wanda was a member of the first class to graduate from Central Dallas High School with the class of 1959.

She played girls six-onsix basketball for the Washington Township Orioles and the Central Dallas Cyclones, and with that experience she loved watching college basketball, cheering on ISU and Wisconsin as two of her favorites.

Wanda loved sharing the many stories she had about raising her five “rambunctious” kids with the grandkids. While tough love sometimes ruled the day for her kids, “Grandma Wanda” had nothing but soft spots for the grandkids.

There aren’t too many bleachers in Iowa that Wanda had not sat on following her kids, and it only continued with her grandkids. She cheered on the Central Dallas Cyclones, Dallas Center-Grimes Mustangs, ADM Tigers, Woodward-Granger Hawks and later the Perry Bluejays and Carroll Tigers.

“Though she be but little, she is fierce,” and it was with that spirit that she instilled great desire and competitiveness in all her children.

Wanda was a longtime wrestling fan. She didn’t have much of a choice as all four of her boys wrestled, and all of her grandsons have followed that tradition. Watching Wanda at a wrestling meet was oftentimes an adventure.

Although having never wrestled herself, her mastery of grips and holds would sometimes be demonstrated on those sitting next to her as she wrestled her own match from her bleacher seat. Her most famous wrestling advice to her kids is as sage today as it was 40 years ago ”Grab a leg and never let go!”

Even though Wanda was not a fan of the heat, she never missed Kendra’s softball games.

Wanda spent more than 20 years working at the U.S. Post Office, making her a familiar and friendly face that people of the community looked forward to seeing. She loved sharing the things that brought her joy, such as watching and feeding the birds as well as using her green thumb to grow beautiful flowers, especially her iris.

Wanda literally lived for her grandkids. As her health challenges mounted, she used life event goals as her motivation for pushing on: the birth of the last grandchild, the graduation of the first grandchild, then the second and so on. She reveled in the accomplishments of the kids!

Wanda also greatly valued her friendships. Her best friends meant the world to her, whether it was talking often on the phone with Peggy or having lunch at the Waterfront with Pat and Karen. A trip to South Dakota with Linda and Diane was something to be treasured.

Wanda loved traveling and often told stories of her trips with her sister, Doris, and brother-in-law, Jerry. They attended many Native American events and spent much time sightseeing. This last trip was one that she had been anticipating for a long time.

She worked hard to get strong enough to be able to think about going. Her love for adventure and zest for life convinced her to go. Wanda passed away peacefully Aug. 31, 2021, in Gallup, N.M.

Wanda always said, “I am just an average person. I don’t know how I deserved such loyal friends and wonderful children.”

Left to cherish her memory are her five children and their spouses; one brother, Larry (Karen) Taylor of Bouton; one sister, Doris (Jerry) Waite; and her nine grandchildren.

Preceding her in death were her parents; and one niece, Patricia Waite.

Memorials in Wanda’s name may be sent to Murdock Funeral Home in Perry.