Iowa House of Representatives lawmaker and Waterloo native Rep. Ras Smith brought his campaign for workers’ rights to Perry Friday morning, sharing experiences of the virus outbreak at the Tyson Foods Inc. factory in Waterloo that chimed with similar stories in Perry.

“As the COVID outbreak ran rampant across my community like a lot of communities across this state, we saw the dereliction of duty,” the third-term Democrat told the small crowd at the McCreary Community Building. “We saw the state taking the side of corporations and giving them blanket immunity as opposed to standing up for people and holding those corporations accountable. That’s not what my family taught me. That’s not what Iowa taught me.”

Smith’s father retired after 43 years at the John Deere factory in Waterloo, and his mother is a Baptist minister. He said Iowa’s values are “really rooted in valuing people, treating our people, yes, as human beings but also understanding our value to society and our ability to contribute.”

Smith’s labor-empowerment efforts follow the creation in February of the U.S. House Oversight Committee’s Select Subcommittee on the Coronavirus Crisis, which is seeking information on the response of Tyson, JBS USA and Smithfield Foods and the U.S. Occupational Safety and Health Administration (OSHA) to the pandemic that decimated meatpacking plants in several states, including Iowa.

The Select Subcommittee’s investigation shows that nearly 54,000 workers at 569 meatpacking plants in the U.S. have tested positive for the coronavirus, including 12,413 workers at Tyson factories, the most of any meatpacker. At least 270 packing plant workers have died nationwide, including 39 Tyson workers, according to the subcommittee’s data.

More than 1,000 of Tyson’s 2,800 Waterloo workers contracted COVID-19 in the spring 2020, leading the company to temporarily cease operations and reopen with some new safety measures. Similarly, 730 workers at the Tyson Fresh Meats plant in Perry were infected, nearly 60% of the 1,250 workers tested and by far the largest portion of a packing plant labor force found in Iowa.

Smith said his first term in the Iowa House of Representatives did not begin auspiciously in 2017, when the Republican-controlled legislature gutted the state collective bargaining law, Chapter 20, which passed the legislature in 1974 with bipartisan support and was signed into law by Gov. Robert D. Ray, a Republican.

The Republican lawmakers also made sweeping changes to Iowa’s workers’ compensation statute in 2017, making it harder for workers to file claims, narrowing employers’ liability, limiting attorney fees and reclassifying specific injuries — such as shoulder injuries, common in factory work — in order to dramatically reduce both the amount and duration of benefits.

“A lot of people at Tyson’s were afraid to come out and talk about what’s happening there out of fear of retribution from their employer,” he said. “I understand it because a lot of the people we are fighting for, this is their first taste of the American dream, and I’m sad that it’s been bittersweet because of the circumstances they’re working in.”

Smith said the health and safety of workers should be everyone’s first priority, even when it entails minor discomfort, such as wearing a face mask in order to slow a viral pandemic.

“Our goal is about keeping each other safe,” he said. “At the end of the day, that’s why we’re wearing these. It’s about that mutual respect for each other and keeping each other safe until we get through this thing. The second we do, I look forward to sitting down and having a Budweiser and taking this dang thing off. But until then, I’m going to do what I have to do to make sure my family is safe, my community is safe. That’s what it’s supposed to be about.”

Subordinating profits to people is the bottom line of Smith’s labor philosophy, he said. 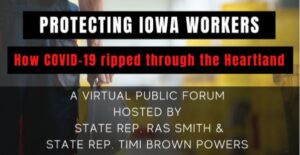