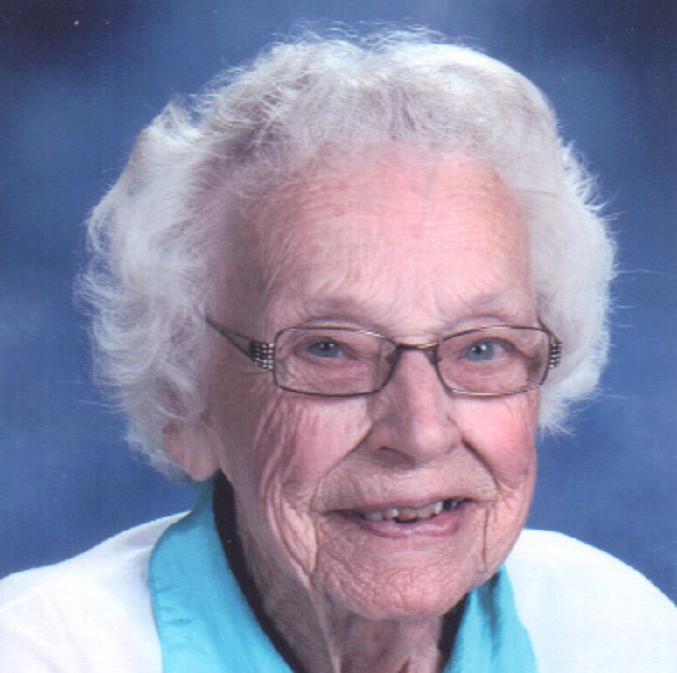 Wilma McManus, a longtime Adel resident, died July 22, 2016, at the age of 102. She died at Legacy Pointe nursing facility in Waukee, where she had been a resident since January 2014 after sustaining a fractured leg in falling on the ice at her home, where she had lived in for 67 years.

Mass of Christian Burial will be 10:30 a.m. Monday, July 25 at St. John’s Catholic Church in Adel, with burial at Glendale Cemetery in Des Moines. Friends may call after noon Sunday, July 24 at McCalley Funeral Home, 735 S. 14th St. in Adel, where family will greet friends from 2-5 p.m. with a prayer service at 5 p.m.

Wilma was an educator, having started teaching in a one-room school in Linden in the late 1930s. She also taught in the Adel elementary school for five years in the early 1950s. She served as Dallas County Supervisor of Elementary Instruction and, prior to her retirement in 1977, was elementary principal in the Waukee Consolidated School.

Besides being the educator that she was, Wilma was also well known for her decorated cakes. There were many generations that had either their birthday or wedding cakes baked and decorated by Wilma.

Wilma, the eldest of four children, was born July 20, 1914, to Clarence and Ethel Todd Capp in Boone. Her parents later moved to Dallas County, where she started second grade at Washington Township School in March 1922.

Graduating in 1932, she took classes at the Iowa State Teachers College in Cedar Falls, now known as the University of Northern Iowa. It was here that she obtained her certificate to teach in a country school. At the time of her death, Wilma was the oldest living graduate of Washington Township.

Wilma married Ray McManus Dec. 23, 1942. Ray was from Des Moines and had a law practice in Perry prior to the outbreak of World War II. While her husband was overseas during the war, Wilma lived with her parents and taught sixth, seventh and eighth grades at the Gardiner School.

After her husband’s discharge, they moved to Chicago, where he took a federal job with the Office of Price Administration. It was in Chicago where Wilma and Ray’s only child, their daughter Kathryn (Kay), was born. They returned to Iowa in 1947, where Ray practiced law until his death in 1950.

Wilma then returned to teaching until her retirement.

During her retirement years, Wilma served on many local committees and was known by virtually everybody in Adel. She was an active member of St. John’s Catholic Church. She was truly a legacy in her own right.

Wilma is survived by her daughter, Kay, from Orlando, Fla.; her youngest sister, Kathryn Dawes; many nieces and nephews; and many friends.

Memorial contributions may be directed in Wilma’s memory to the Adel Public Library or a charity of donor’s choice. Online condolences may be left at the McCalley Funeral Home site.