Arrangements in the sardine-can-like Dallas County Courthouse appear poised to rearrange thanks to a big wave of auto title transfers bearing down on Dallas County Treasurer Mitch Hambleton’s office and the equally pressing need for more courtrooms in the Fifth Judicial District.

The treasurer processed about 25,000 titles transfers last year, up from 12,000 in 2001, but that number is about to jump to 40,000 now that Insurance Auto Auctions, an auto-salvage company, is ramping up operations at its new De Soto facilities.

In order to manage the 50 percent increase in work, Hambleton hired one new full-time person in July and plans to hire two more soon. The Dallas County Board of Supervisors approved the staffing additions to the treasurer’s budget.

The challenge for the treasurer is finding a place to put these newly hired bodies. Hambleton’s 15-person office — soon to be 18 — is already the third largest in the county, behind the sheriff’s office and secondary roads department. The treasurer’s operations are currently split between the tax department located in the courthouse and the motor vehicle and driver’s license departments at 918 Court St.

He is not alone in his despair. Hambleton’s anxiety over chronically cramped quarters is matched by the equally desparate space needs of the Dallas County District Courts, a point made repeatedly over the last 18 months by Fifth Judicial District Chief Judge Arthur E. Gamble and Judge Randy V. Hefner in discussions with the Dallas County Supervisors.

“We need on a fairly routine basis five courtrooms,” Gamble told the supervisors in May 2017. The county courthouse is currently configured for four courtrooms: one large and two smaller courtrooms on the third floor and another smaller courtroom on the fourth floor.

Population growth in Dallas County is causing the shortage in courtrooms. The county crossed the 80,000-person threshold in 2016, which statutorily authorized the appointment of an additional associate district judge to the county, but chronic underfunding of the state judiciary by the tax-cutting Iowa Legislature has delayed the appointment.

The delay might be a kind of blessing in disguise for Dallas County because the courthouse does not have enough courtrooms to house a new associate district judge even if he or she were appointed. When District Judge Thomas P. Murphy of West Des Moines was sworn in last January as a judge in the Fifth Judicial District, he occupied the chambers of retiring District Judge Gregory A. Hulse.

The population has doubled since 2000, according to the U.S. Census Bureau, and that rapid growth drives all the space-related decisions made by the county supervisors. The 2015 repurposing of the old Dallas County Care Facility into the new Human Services Campus and the current construction of the Dallas County Law Enforcement Center are two big, recent moves in the county’s perennial space game.

Those administrative needs are no longer impending. They have arrived. Discussions about allocating space in the cramped county courthouse have been going on since at least 2007, when workers for the state and county resumed their functions in the 116-year-old building after the two-year, $10 million remodeling and renovation project.

In anticipation of the courts’ expansion and in an effort to manage their own expanding workloads, county departments have been slowly vacating the courthouse for several years. The Dallas County Auditor’s office moved out of the courthouse in summer 2016 and centralized its election, accounting and real estate services at 210 N. 10th St.

Summer 2016 also saw the county’s information services or IT department swap its ground-floor offices in the courthouse for rooms at 902 Court St., and the Dallas County Assessor’s office vacated the courthouse last summer and now operates across the street at 121 N. Ninth St.

As things now stand, the third and fourth floors of the courthouse are wholly devoted to court functions, and all the proposed rearrangements will occur on the first and second floors. The east wing of the first floor is currently occupied by the Dallas County Clerk of Court and half of the west wing by the offices of Juvenile Court Services. On the second floor, half of the east wing now houses the offices of Dallas County Recorder Chad Airhart, and half of the west wing holds Hambleton’s tax division.

The stage is thus set — or bare, rather — and ready for the next act in the Dallas County Courthouse. The first scene was played at this week’s supervisors meeting.

Fifth Judicial District Court Administrator Christopher Patterson atteded this week’s supervisors meeting and proposed combining the offices of the clerk of court and juvenile court services in the east wing of the second floor and converting the west wing into an additional large courtroom, bringing the courthouse total to five.

The county treasurer and recorder would relocate to the first floor of the courthouse, with Hambleton’s offices taking the lion’s share of the floor space.

Patterson’s was the most recent proposal emerging from a protracted series of meetings dating from May 16, 2017, when Judges Gamble and Hefner presented the court’s space needs at a session of the Dallas County Supervisors, accompanied by Patterson and Fifth Judicial District Juvenile Court Officer Supervisor Linda Colby.

“We’re working well together,” Purdy told the supervisors July 31. “We understand the final outlook, the final floor plan, but to get to the final end game does mean some shuffling and some adjustment. We need to decide what we can live with to make it happen.”

Purdy presented the board with a new set of conceptual drawings Aug. 7, and Patterson brought his latest proposal Aug. 14.

Patterson said his plan “addresses the court’s short-term and intermediate-term needs as well as addresses the board’s priority to provide additional space for the treasurer’s office and a different location for the recorder. We believe this proposal is both beneficial in terms of minimizing cost and delay.”

The supervisors appeared to react favorably to Patterson’s latest iteration.

“This does provide a solution to make that happen,” Hanson said.

Patterson said the new large courtroom on the second floor “would provide us some flexibility in terms of the types of hearings that we can schedule. It will provide us increased capacity to handle cases, to assemble a jury, to conduct court-services events.”

Supervisor Kim Chapman questioned the feasibility of combining the clerk of court and juvenile court services on the east wing of the second floor. Patterson said the “co-located offices” would mean “reduced space for both,” but both Colby and Dallas County Clerk of Court Anna Butler were agreeable to the move.

Butler said moving to the second floor will be an adjustment, but she understands the need for more courtrooms.

“I think we’re all pretty much on the same page,” she said. “Everybody’s kind of moving in the same direction. It’s just when do we pull the trigger. There’s a couple of those practical issues that we want to understand before we get there instead of going, ‘Oops!'”

“This is a solution,” Patterson said, “that would allow this arrangement to remain in place beyond just a mere year or two but further into the future so, again, our short-term and somewhat intermediate-term needs would be met.”

The long-term outlook for Dallas County’s space odyssey is harder to predict. The county courthouse might eventually become all courthouse and no county.

“Really, really down the road,” Patterson said, “there may be an opportunity or at some point the board may decide or additional county administration space may become available and the board makes the decision to move out or to relocate the treasurer’s office and recorder’s office, and if that were to occur, we would approach the board about turning over the courtouse, if you will, for court functions. If that were to occur, I could envision an arrangement in which the clerk of court returns to the first floor and juvenile court services return to the first floor because that is consistent with modern courthouse design, where you have your high-volume functions located on the main floor or at least the lower levels. Doing that would free up that east wing of the second floor for construction of yet another courtroom, so there could be two courtrooms on the second floor. This is into the future, but that is what I could foresee if those other dominos were to fall into place.” 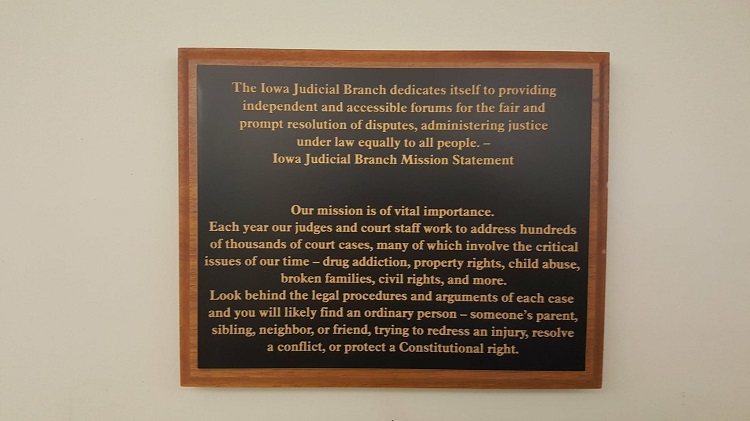