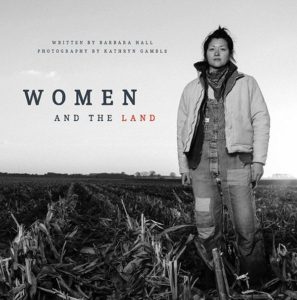 Woodward farmer Jan Kaiser is featured in a new book that highlights women farmers in Iowa and the challenges they face in an ag economy dominated by corporate monopolists and suffering environmental degradation.

Barbara Hall’s “Women and the Land” (Ice Cube Press, 2017) profiles more than 25 women who are impacting Iowa’s farmland, and the accompanying photographs by Kathryn Gamble bring an earthy immediacy to these women’s stories.

Kaiser and her sister, Sharon Hoskinson, own a farm in Boone County. The land has been in their family since 1864, one of the rare farmsteads that has been passed down through generations of women.

Kaiser’s great-grandfather died in the U.S. Civil War, leaving behind a wife with three children she could not raise alone. Two of the children were sent to an orphanage, not uncommon in those days, and the youngest, Florilla, was given to neighbors along with the land her mother had inherited.

When Florilla was 16, she was married to a relative of her adoptive parents, and the land, 100 acres, was given to the couple as a wedding gift. Florilla and her husband were as fertile as the land, and one of their nine children was Kaiser’s maternal grandmother, Iva. Jan’s parents, Vern and Melva, eventually took over the farm, and it has now gone to Jan and her sister, as there were no brothers.

Some of the women in “Women and the Land” have inherited rural property and are managing the agriculture practices from afar, while others, such as Kaiser, are working the land directly, providing food to the heartland.

Many of the women grew up on farms, left the land to get an education and left the state to follow their passions, only to find that their deepest passion is really the land, to which they have returned.

“Each of the women is affecting the land in her own unique and feminine way,” said Hall, the author. She and photographer Kathryn Gamble have been professional collaborators and good friends for more than 20 years.

Sally Worley, executive director of Practical Farmers of Iowa, said the inspiring figures in “Women and the Land” are “examples of diversity, hard work and innovation on Iowa farmland. They provide hope for our farming future.”

Hall and Gamble’s book, designed by Joline Rivera and Nellie Williams, is available through Amazon.