The council approved the first two readings of the amended zoning ordinance, which would have permitted the building of Burkhart’s $3 million apartment complex near Hawk Stadium, but they voted down the measure on its third reading when presented with a petition signed by 15 nearby property owners opposed to the project.

Burkhart hoped to build two 24-unit apartment houses on the northeast corner of Fifth and Cedar streets in Woodward. The housing units were planned to stand next to Hawk Stadium, where the Woodward-Granger High School and Woodward Academy football teams play.

The 3.2-acre property is currently zoned for single-family dwellings (R2), and Burkhart sought to have the parcel rezoned for multi-family housing (R3). He said he wanted the city’s approval of the rezoning before sinking his money into engineering and architectural designs for the apartment complex.

The Woodward Planning and Zoning Commission recommended in December that the city council approve the zoning change, but progress stalled last spring when the council postponed the first of the three required public readings of the amended zoning ordinance after doubts were raised about the integrity of the city’s sanitary sewer system.

The council agreed in February and again March to table the first public reading of the ordinance, pending a report from Woodward Public Works Director Chris Newland on the results of AccuJet sewer cleaning company’s jetting and videotaping of the city’s entire sanitary sewer system. The city hired AccuJet in February and has so far paid $40,000 for the service.

The council approved the first reading of the amended ordinance in May, with members in support arguing that further delays were unfair to Burkhart and that the town’s progress should not be held hostage by the  sewer system. The second reading passed in June.

Council member Dave Luke led the charge against the zoning change, which the rest of the council members favored. Luke was supported in his opposition by Woodward residents Bev Johnson and Bill Barrow, whose properties on Birch Street have a history of flooding and who feared the new apartment complex would compound their sewer problems.

As with many Iowa towns, Woodward’s sanitary sewer system is subject to inflow and infiltration during heavy rains, leading to sewage backups and flooding in some homeowners’ basements. A study by the city’s engineering consultants, Veenstra and Kim Inc., concluded the proposed Burkhart construction would not significantly increase the sanitary sewer’s volume, but the study was dismissed by opponents of the project as not pertaining to Woodward.

“We have taken thousands and thousands of gallons off the sanitary sewer system from where we used to be,” Newland said Monday. “We’re just not done with this thing yet and if we had the launches, had the information on whose got these footing tiles, then we could start to reduce (flooding) on Birch.”

Johnson asked Newland whether a lift station could be constructed to carry wastewater away from the low-lying area along Birch Street. Newland said it would be cheaper first to identify and correct properties discharging stormwater into the sanitary system.

“Dollar-wise,” Newland said, “we’re just waiting for the guy with the camera. We’ve got 145 lines we’re going up. Money-wise, you’re talking several millions of dollars to alleviate that problem (by building a lift station) when there’s a very strong possibility that we can alleviate it by removing the footing cuts and doing what’s right.”

“I’ve heard this same plan for many years now,” Barrow said, “and it’s always been the footing tiles, the tiles hooked into the sewer. Nobody’s made a mandate to say, ‘Get ‘er done.’ It’s always, ‘We’re going to do this. We’re going to do that.’ It’s never happened.”

Newland noted the city has “had 108 sewers replaced in this town in 11 years. It isn’t that we haven’t been out there looking for them. I wish I knew just off the top of my head how many footing tiles have been removed.” If properties are found discharging stormwater into the sanitary sewer system, the city gives the owners one year to remove them, he said.

Johnson suggested further postponing the zoning change in order to give out-of-compliance homeowners a chance to repair their properties.

“Let’s table this for a year until we get our sewer work done,” she said. “Let’s see if it’s going to work and then talk about adding new buildings to it.”

“Ninety-nine percent of the time our sewer system is more than adequate,” Newland said. “It’s when we get the big rains after we’ve had a lot of rain and the footing tiles and bad sewer services and leaky basements — everything’s getting into the sanitary at that point. Right now this summer, we’re not having any issues. I wish we would have had some big rains just to see the aftermath after we cleaned and cameraed the sewers.”

Council member Todd Folkerts assured residents of his commitment to solving their sewer problems — “I’m not dropping this project,” he said. “It’s that simple” — and he moved to table the third reading until the AccuJet report was completed. The city attorney informed the council they could not table the third reading but must give the ordinance an up-or-down vote.

In order for the council even to consider amending a zoning ordinance, Woodward’s zoning regulations require at least half the people affected by a proposed rezoning to agree to the change. Burkhart collected six signatures at the first of the year from residents living within 200 feet of the proposed project, and they signaled they were agreeable to the idea. Their signatures presumably represented at least 50 percent of the number of affected property owners.

Two of the signers, Barrow and Johnson, later tried to withdraw their names from the petition in order to leave the proposed rezoning short of the 50 percent minimum needed for council consideration, but they were told by the city attorney that the five-day deadline for protesting the original petition was passed. 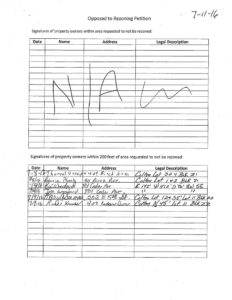 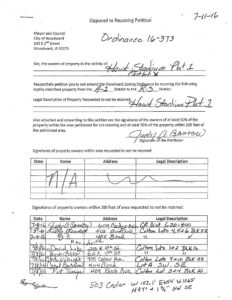 In an 11th-hour ploy, Barrow presented the council at Monday’s meeting with a protest petition signed by 15 people with property within 200 feet of the proposed building, all of whom opposed the project, he said.

While a simple majority decided the issue on the first and second readings, which both passed with four-to-one votes of the council, the petition submitted Monday in protest of the zoning change raised the bar for approval to a super majority.

According to Iowa Code 414.5, if a written protest against a zoning change is signed by the owners of 20 percent or more of the property located within 200 feet of the boundaries of the property proposed for rezoning, then the change “shall not become effective except by the favorable vote of at least three-fourths of all the members of the council.”

First-term council member Folkerts voted in favor of rezoning on the first and second readings but said he opposed the ordinance amendment on the third reading “because of that protest petition. I was elected to serve the voters and when that many people are against something, I respect that and take it seriously.”

Council member Luke, who opposed the project from the start and was among the 15 signers of the protest petition, was satisfied with the result of the council’s deliberations.

“I have had enough people in that part of town contact me that they’re not looking forward to a multi-family dwelling in a residential area like that,” said the second-term council member. “I’m elected by people I need to represent, and I’m not going to budge forward on this at all.”

Wayne and Julie Burkhart seemed to accept to council’s decision with stoic resignation.

“My family’s lived in this area for 134 years,” Wayde Burkhart said, “unlike some of the people in there on the council who have lived here 20 or 30 years. And we’ll still be here 100 years from now, so this is just a little bump on a long road.”

Julie Burkhart noted their property is still zoned R2, which permits the construction of single-family residences and duplexes. She said a number of people have expressed interest in senior-citizen townhouses, and this is something she and her husband will now consider.

“We are considering other options,” she said. “I don’t know if they’re going to be able to serve people like the younger families and the seniors both as well as we’d hoped. We were wanting to put something there that would encourage kids coming back to Woodward after they get out of college and are starting families.”