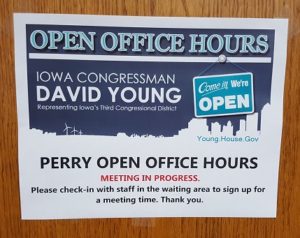 The arrangement was a departure from the townhall format of Young’s more recent visits to Perry, and it gave voters a focused portion of the soft-spoken, second-term congressman’s undivided attention.

Before Young’s mini conferences began, he first had to run the gauntlet of 10 members of the Iowa Citizens for Community Improvement group who stood outside the entrance of the McCreary Community Building with placards and banners reading, “Healthcare for all now!” “Single payer now!” “Our health over corporate profit!” and similar messages related to recent Congressional efforts to repeal the Affordable Care Act.

Dave Leonard of Dallas Center, a longtime staff member in the Adel-De Soto-Minburn Community School District, was first in line to meet with Young for 10 minutes. Leonard said repairing the Affordable Care Act, sometimes called Obamacare, was an issue of great concern to him, but he also talked with his representative about climate change, money for Houston instead of the wall, raising taxes on the wealthy and raising the debt limit.

Others greeting and meeting with Young were Kiran Pathuru and Hanu Yala, Des Moines residents who work for the state of Iowa. Both men are immigrants from India, and they asked Young to consider correcting anamolies in the H1B visa program, which allows U.S. employers to employ foreign workers in specialty occupations.

Pathuru said he has lived in the U.S. 11 years, earning a master’s degree at the University of Iowa and then landing a state job. He said his son, once he turns 21, will be required to leave the U.S. because he will no longer be covered under Pathuru’s H1B visa, but a child who was brought to the U.S. without documentation would be eligible to remain in the country under the terms of the Dream Act or the Deferred Action for Childhood Arrivals policy.

Yala’s story was similar. He has lived and worked seven years in the U.S. He said many people on H1B visas wait 20 or even 30 years before attaining permanent-residency status, while refugees are admitted almost immediately in comparison.

Lois Hoger of Perry also came to discuss the Affordable Care Act with her congressperson.

Young said he desires options for Iowans and fears the individual insurance market is collapsing in the state.

“We want to make sure that there’s options out there for Iowans when it comes to insurance,” Young said. “The individual insurance market is disappearing, and Medica is the only one who said they’re going to commit to staying right now with a 57 percent raise. That’s pretty daunting. My goodness!”

Hoger said the collapse of the individual market is the result of a deliberate policy.

“I feel like the president wants it to fail on purpose,” she said.

“I don’t want the bottom to fall out,” Young said. “I think we need to act. I think it’s going to be a repair job at this point. Efforts have been made for repeal and replace and, as you can see, the Senate didn’t have the votes to proceed. So it’s going to be probably looking at narrow portions of the law or the industry, whether it’s Medicaid or whether it’s maybe state innovations in flexibility or whether it’s doing something with the individual insurance market, kind of do some more narrowly define parts but keep some of the parts that work. Right? I mean there’s broad consensus to allow kids up to age 26 to stay on their parents’ employer’s plan. Preexisting conditions are things that both sides want to make sure are protected.”

Hoger noted single-payer systems providing universal health insurance coverage are the norm in all other developed countries, and they consume a smaller portion of GDP and show better outcomes than the U.S. for-profit system.

“That’s not being talked about at the federal level,” Young said, “and I don’t subscribe to that.” He said single-payer systems lead to healthcare “rationing,” in which the old and sick “are put at the back of the line.” Instead, Young said, states need “certain flexibilities” and not a “one-size-fits-all approach.”

Young also rejects a one-size-fits-all approach when it comes to water quality and environmental regulation, as he told Ray Harden of Perry, Dallas County Soil and Water Conservation District assistant commissioner and a longstanding member of the Raccoon River Watershed Association.

Young said he recently introduced a bill called the Water Quality Conservation Act, a watershed-level cost-sharing program that “allows you to analyze what the best conservation practices are in a not kind of a one-size-fits-all watershed approach.”

He said his proposed 10-state pilot project would see federal funds “harnessed in a way that they haven’t been harnessed before when it comes to water quality conservation. It targets funding at watersheds. That’s where it needs to happen. You know that.”

“We are not giving enough incentives to the farmers to put agricultural practices in place,” Harden said, “both edge-of-the-field and in-field practices, to reduce nutrient runoff. We don’t have enough funds for those, and funding is going to be a problem, I know, for the federal government as well as the state of Iowa.”

“There’s a lot that can be done,” he said, “and it’s expensive. Farmers won’t do it unless we get some initiative for it.”

Young, who sits on the Agriculture Subcommittee of the House Appropriatons Committee, said his federal-state cost-sharing proposal for a watershed-level approach to water quality is attracting interest.

“I’m excited about this,” he said. “Across the political spectrum, the tags left and right, Democrat and Republican, on this issue I’ve seen them dissolve and disappear. The chair and the ranking member of the agriculture committee want me to be the point person on water quality.”

“I’d be more than happy to advise you,” Harden said.

“We’ll be reaching out,” Young said as his timekeeper interposed and said Harden’s 10 minutes were passed.