Although Perry might not have played as large a part as Moingona in Kate Shelley’s famous saving of a train passing through Boone County July 6, 1881, this year’s 138th anniversary musical tribute to Shelley’s heroism comes in part from the 18-member Zahn family of Perry.

Five of Drew and Debi Zahn’s 16 children have starring roles in “Kate Shelley’s Bridge,” the  musical, to be staged at the Perry Bible Church July 11 at 7 p.m.  Many of the Zahn children took part in last summer’s Perry Community Theater production of “The Trial of Goldilocks.”

Boone playwright Diana Star Helmer explained how this classic chapter in central Iowa history was adapted for the stage and how the Zahns became major supporters of the project.

“Kate Shelley’s name and story are known around the world,” Helmer said. “When I was a tour guide at the Boone railroad, visitors from other countries often asked for information about Kate. I shared what I could find.”

While Shelley’s heroic deed occurred unwitnessed and in a remote location, Helmer said, her teenage act gave her lifelong fame. In various interviews throughout her life, Kate told the story of the night that defined her otherwise down-to-earth life.

“The more I learned what Kate’s legend means to people, the more I thought that this story would be a perfect theater experience,” Helmer said. “Summer theater about Laura Ingalls Wilder takes place in numerous Midwest locations. Hannibal, Missouri has re-enacted the Tom Sawyer tales. I wrote the play I wanted to see.”

In the process, Helmer found that Ogden was a major source for creative collaborators from the community.

“As I began,” she said, “I shared my idea with Christopher Levi of the Boone Community Theater. He replied, ‘Have you ever considered writing a musical? My son is a composer.’”

“I very much enjoyed seeing the lyrics and building off of Diana’s vision,” Gershom Levi said, “being able to take the flow of the lyrics and bring them to life with music.” He said the musical score “helps the emotional intensity of the scenes. This music helps an audience feel the sorrow of Kate’s mother letting Kate go and Kate’s love and fond memories of her father.”

As director of the play’s pit orchestra, Levi will be showcasing other musical talents during the performances, including his sister, Johanna Levi, who shares the starring role of Kate Shelley with Boone’s Carlee Carpenter. Two of the Zahns play Kate’s siblings, and Bailey Zahn, Drew and Debi Zahn’s daughter-in-law, plays Kate’s mother.

“My family walked the trail where the tracks used to be between the Moingona station and the Des Moines River,” said Johanna Levi. “It would have been scary to run along the tracks in the middle of the night in a storm with no light and crossing the river would have been even more terrifying.

Mishelle Levi, producer and director of “Kate Shelley’s Bridge,” has done many shows with the Zahns and specifically sought them out when auditions began. Levi said she first discovered Kate Shelley’s history as a fourth grader and later heard Jack Shelley, Iowa State journalism professor and Kate’s nephew, share a personal perspective of his heroic aunt. The tales transformed young Mishelle.

“I felt proud to be a young girl in Iowa,” Mishelle Levi said. “It was exciting to hear about local history at such a personal level. I felt close to her. I always enjoyed personal stories about brave young people. I have always loved pioneer stories about a time when life was simpler, and I wanted the Zahns’ talent in this show.”

Along with the five performing Zahns, Levi’s 21-member cast includes performers from several different communities in the Perry area.

The July 11 performance begins at 7 p.m. at the Perry Bible Church. The cast will also share the story at the Perry Public Library July 11 at 2:15 p.m. 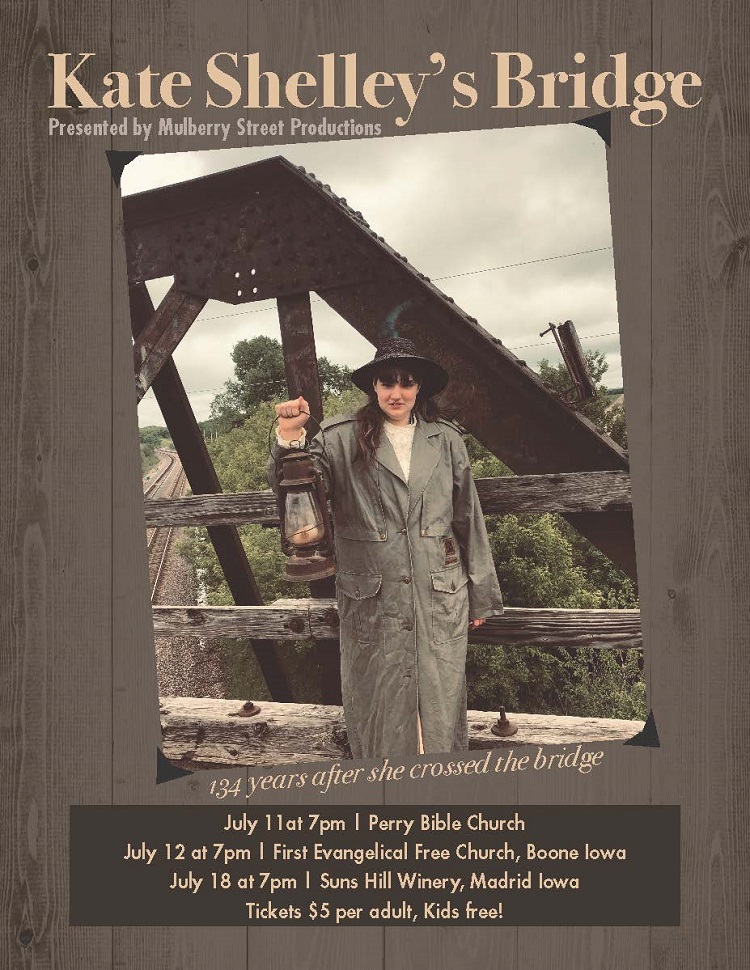