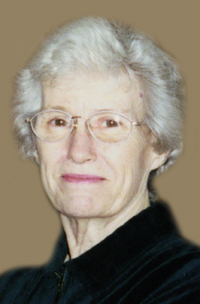 Betty Lou LeMaster, 82, passed away peacefully and was welcomed into Heaven Saturday, May 23, 2015.

Betty was born December 20, 1932 in Boone, Iowa, to Noah Martin Benson and Cora Anna Marie (McNeley) Benson. Her childhood was spent in Boone, and then the family moved to Madrid, where she attended and graduated from Madrid High School.

On June 7, 1951, she married the love of her life, Gerald Eugene LeMaster, in Ottumwa.  They started their married life on a farm outside of Granger and later acquired a farm north of Woodward, which became a Heritage Farm.  Betty enjoyed working alongside her husband, being excellent stewards of the farm entrusted to their care.

Betty was a beautiful wife, a wonderful mother to three daughters and a loving grandmother to 10 grandchildren and one great-grandchild with another on the way.  Her family was the joy of her life. Betty never missed an opportunity to applaud and cheer on her children and grandchildren.  Having a sweet and joyful spirit, she showed love to everyone she met.

She was actively involved in her community.  When her children were young, she was a Sunday school teacher, a Campfire leader and a home-room mother.  Along with friends and neighbors, she was a member of the Woodward United Methodist Church, Woodward United Methodist Church Women’s group, JFA Bridge Club, Iowa Genealogy Society and a bowling league.

She was reunited with her parents, Martin and Marie; infant sister, Eva Benson; and brothers, Robert and James Benson.

Her family will gather with friends to celebrate her precious life at a visitation scheduled Wednesday, May 27 from 5-7 p.m. at the Woodward United Methodist Church.  Funeral Services will be held on Thursday, May 28 at 11 a.m. at the church.  Interment will follow at the Woodward Cemetery.

Memorial contributions may be directed to the Woodward United Methodist Women or the Alzheimer’s Association, Greater Iowa Chapter, in Betty’s name.