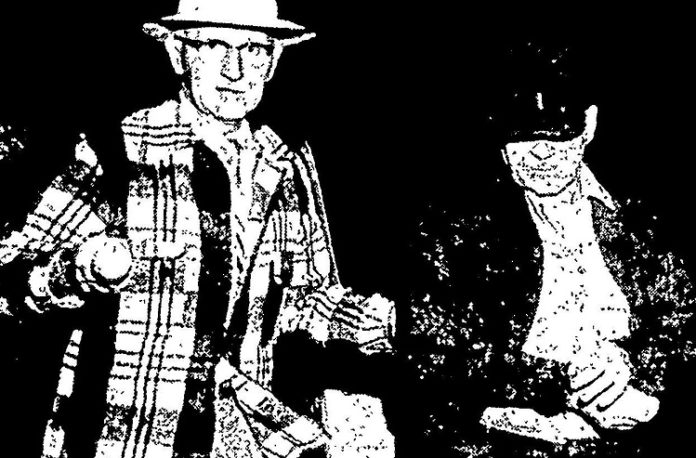 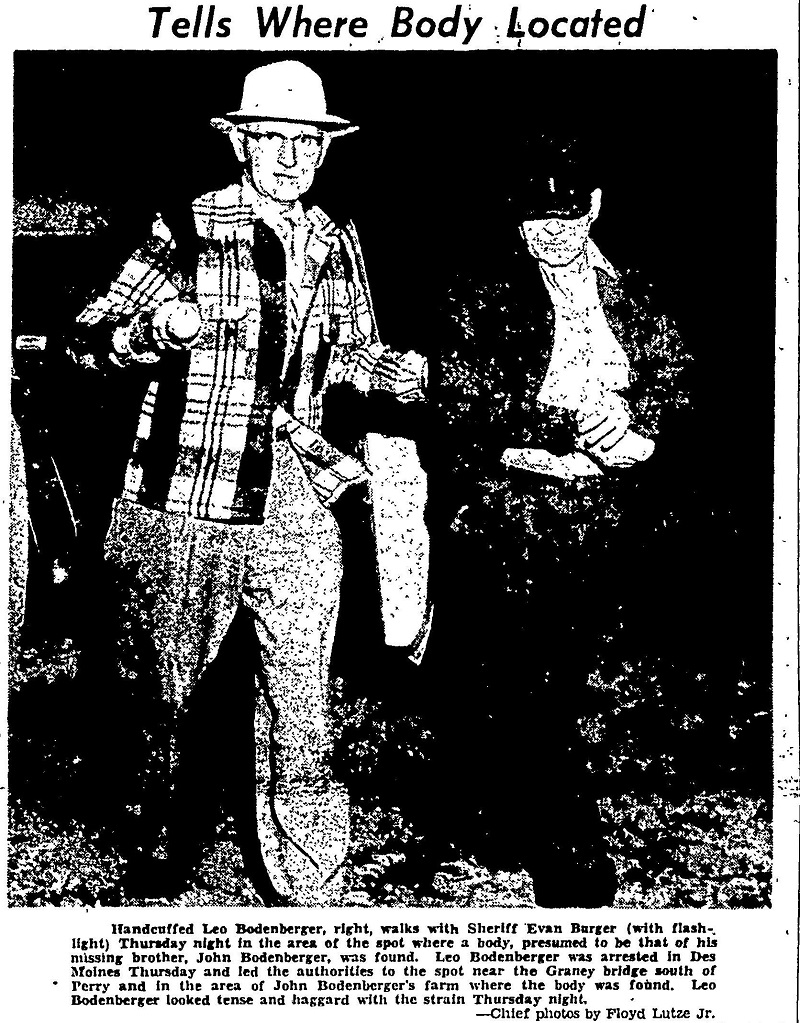 The body of a man presumed to be John Bodenberger, a farmer living just south of Perry, was found Sept. 9, 1954, in a patch of weeds by the Raccoon River just south of the old Graney bridge.

His brother, Leo Bodenberger, was being held in Des Moines on a open charge without bond. Dallas County Attorney George Soumas ordered an autopsy immediately performed.

In the course of the probe, Dallas County Sheriff Evan Burger found that a man representing himself as John Bodenberger cashed a check at a Des Moines surplus store on the day of his disappearance. A clerk at the store told Burger the man was living at the Munger Hotel in Des Moines.

The room clerk told Burger the room was signed to a “Leo Budd.” When the sheriff entered room 24 at the Munger Hotel, he found Leo Bodenberger lying on the bed, reading a magazine.

There was a paper bag on the table and when Burger opened it, he found two sticks of dynamite. When asked about this, Leo said he bought it at a Perry store to go fishing.

That’s when Leo told authorities that he could lead them to John’s body.

Back at the hotel, Sheriff Burger searched under the old linoleum in Leo’s hotel room and found VFW and American Legion cards belonging to John along with John’s billfold, a pawn ticket for a man’s watch, signed by Leo Budd, and John’s checkbook, which Leo used by signing John’s name.

Burger directed Soumas to go to the Graney bridge while he notified Coroner DeFord, and they would look for John’s body with Leo. Arrived at the scene, Leo directed them to a pasture near the bridge, saying “over there,” and a few minutes later John’s body was found.

The body was decomposed and was found to have a handmade rope tied around the neck.
John Bodenberger, 62, lived alone in a old one-room house at the end of a long lane about one-quarter mile south of where the body was found.

An autopsy showed death was caused by a blow to the head. A broken gun stock and spent shotgun shells was found by the body. Leo ended up pleading guilty to murder, and as a result there was no jury trial. A hearing was set for Oct. 6, 1954.

At the hearing, Soumas reviewed the evidence, starting with the two statements by Leo that showed positive premeditation. In one he said he took the gun to the river bank on Aug. 29, coming back for it the next day and using it for the murder weapon.

Soumas pointed out that Bodenberger never denied any of the evidence. He repeatedly declined to testify in his own defense.

Don Shirley, the former county attorney who worked on the case with Soumas, said the shotgun that was fired at John would not have killed him, and Leo could have stopped there. Instead, Leo beat his brother over the head twice with the shotgun and then tied a rope around his neck to drag his body to the weeds before taking his things.

Sheriff Burger told Dallas County Court Judge George Sackett, “I believe Leo has told me the truth to the best of his ability.” The sheriff urged lenience.

“I think that this is one place,” Burger said, “where the scales of mercy should be tipped to the side of Leo, and it is my recommendation that the court see fit not to impose the death penalty.”

“In an emotion-packed moment, Frush begged the court for leniency,” according to a news report.

Bodenberger was calm at his sentencing, standing before the judge with his hands in his pockets and eyes cast down. Judge Sackett, “in a kindly voice, told Leo that if he had testified on his own behalf, things might have been different, but no one would never know.”

“Mr. Bodenberger,” Judge Sackett said,”it be the judgement of this court that you be imprisoned in Fort Madison for the rest of your life.”

Bodenberger “seemed resigned — and grateful that the ordeal was over.” He died imprisoned in Fort Madison in January 1972.

George Sackett bought W.H. Winegar’s law practice in October 1926 and became a District Court Judge in August 1953. He resigned his judgeship in September 1961 and returned to
private practice.

The son of Greek immigrants, George Soumas grew up playing in the alley behind the Majestic Shoe Shop, his parents’ store in Perry. Soumas is remembered for his service as a World War II hero, mayor, judge, county attorney, storyteller and friend.

Lenten Thoughts: Have faith in a year of giving things up