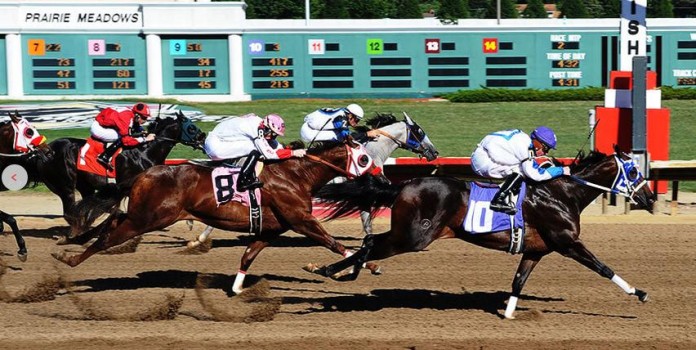 Longtime Perry public figure Chuck Schott will join the ranks of the Prairie Meadows Hall of Fame in a ceremony Friday, Aug. 7 at the Altoona racetrack and casino.

Schott, who was the Prairie Meadows horsemen’s liaison from 1998 to 2014, has a long history with horse breeding and racing. Prior to joining the Polk County gaming facility, he managed for 15 years Bruce Farms in Perry, one of Iowa’s oldest and most prominent thoroughbred horse breeding operations.

Schott’s success at Bruce Farms included breeding Blumin Affair, who took third place in the 1994 Kentucky Derby, finishing behind Go for Gin and Strodes Creek. Blumin Affair later entered stud to 65 mares. The stallion lost a fight against equine protozoal myeloencephalitis and was euthanized on June 16, 2012.

Derron Heldt, director of live racing at Prairie Meadows, said Schott was well respected at the track. Heldt, an 18-year veteran of Prairie Meadows, explained how the Hall of Fame’s nomination process works.

“There’s a couple of different horsemen’s groups here,” Heldt said. “So there’s a group for the thoroughbreds, and they have a say so. The quarter horse association has a say so, and the breeders have a say so and Prairie Meadows has a say so. In any year, a group usually brings a nominee, and it’s talked about amongst the people, and they either get it or they don’t. It’s kind of an informal process.”

As horseman’s liaison, Schott worked as “a kind of go-between between the racing office, where the races are put together,” Heldt said, “and the horsemen that have horses on the backside. He was kind of a liaison between the two. He’d walk the barn areas and talk to horse owners and trainers and if they had concerns, he would bring it back to the racing office.”

Schott would also arrange lodging for out-of-town owners, particularly during “our busy weekends when horsemen would travel in for our state races or some of our bigger races.” He would also track purses the racecourse paid out to horse owners, choose the season’s trophies in advance and do other tasks of facilitation.

“He did many, many things for us,” Heldt said.

Schott will be honored Aug. 7 along with Jack Peters, longtime general manager of U.S. Feeds in Eldora. Peters has at various times served as chairman and director of Prairie Meadows Racetrack and Casino Inc.

According to Heldt, the 2015 Prairie Meadows Hall of Fame inductees will be feted at a ceremonial dinner, at which video compilations of their accomplishments will be aired. Later that evening, the inductees will be present for the second and third races, which will be named in their honor. They will award the trophies to the winning horses in those races.

Although Prairie Meadows opened in 1989, horse racing there is “at something of a crossroads,” according to a recent editorial in the Des Moines Register. While overall attendance numbers are up, simulcast and off-track wagering have dropped sharply in the last five years, the editorial noted.

“Horse racing might not be paying its way at Prairie Meadows,” the editorial said, “but it has been an integral part of a larger operation that has generated $1.4 billion in taxes, grants and charitable donations over the past 25 years.”