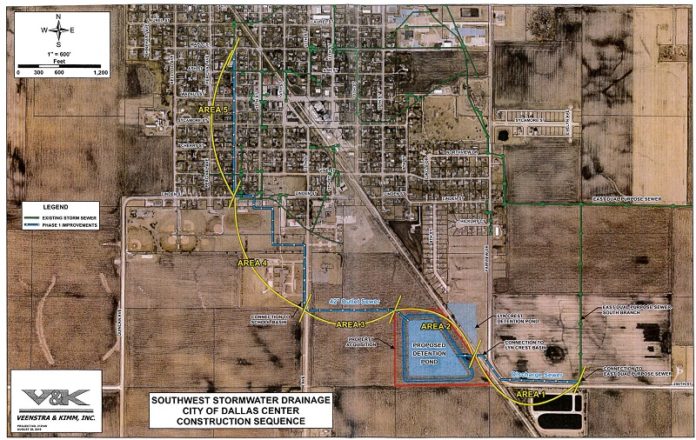 The Dallas Center City Council voted Tuesday night to go forward with the $3 million southwest stormwater project to improve the city’s storm sewer system and relieve flooding on the west side of town.

“We are very excited about the stormwater project,” said Dallas Center Mayor Michael Kidd. “We have been working for two or three years on planning for this project. The city layout is very flat, and thus our stormwater does not move very quickly out of town. This project will address the west side of our town and take water to the south and then east.”

Stormwater will then be carried eastward to a new detention pond to be built on the west side of the Raccoon River Valley Trail and north of 250th Street. The detention pond will lie to the northwest of the city’s wastewater treatment lagoons.

Dallas Center paid about $315,000 to buy land for the new detention pond, including small parcels acquired from the First Presbyterian Church and Spurgeon Manor and a 25-acre section bought from the Wilma J. Pollard Revocable Trust for about $308,000.

“This is something that should have been done 30 years ago,” said Dallas Center Public Works Director Brian Slaughter, “and now we’ve got a council that agrees it’s a project that needs to be done, and they’re willing to spend the money to do it.”

Construction could begin as early as this fall and continue through 2017. Bob Veenstra of West Des Moines-based Venstra and Kimm Inc., the city’s engineering consultant, outlined a five-area plan for construction:

According to Veenstra’s proposed construction schedule, the contractor would be required first to complete Areas 1 and 3 — basically all the pipe work east of R Avenue — during the winter months. The trunk line along Linden Street would be laid in the spring, with the contractor focusing pipe laying in Area 4, across and adjacent to the school property, during the summer months.

Laying the trunk line northward along Hatton Avenue, Area 5, could occur at any time during the project, either concurrently with Area 4 or after Area 4 is completed, and construction of the stormwater detention basin, Area 2, could also occur at any time.

“We’re going to start at the bottom, at the back end,” Slaughter said. “You’ve got to build your detention area first and then pipe backwards.”

Kidd said the sewer improvements will be followed by others as the city’s debt limit allow.

“This is Phase 1,” Kidd said, “since we don’t have enough borrowing capacity to complete the whole project at one time. We will then pluck off small pieces as we can afford.”

In Tuesday night’s action, the council engaged its bond attorney, the Des Moines-based law firm of Ahlers and Cooney, to prepare a sale of about $3 million in general obligation bonds and to prepare a contract for bid letting on the construction project. The council scheduled a 6 p.m. special meeting Oct. 25 for a public hearing on the project, and the bonds are expected to be sold Nov. 15.

The debt financing will cover the costs of preliminary and construction engineering, land acquisition, temporary construction easements, permanent easements, engagement of a financial adviser and bond counsel and the detention pond and outlet pipe.

Veenstra said he is “hopeful that at least on the open part of it, on the base bid, we should have some pretty aggressive pricing.”

“We’ve got to start somewhere,” Slaughter said. “Hopefully, this all works out, and we get rid of some of this water. It’s always a problem.”

Stormwater from the sewer project will discharge into the Walnut Creek watershed. An earlier proposal would have carried the water southwesterly though the Brenton Arboretum. Landowners along that route proved resistant.

“We’re glad to see that they’re going to continue sending their water to the east and not to the west,” said Andy Schmitz, director of horticulture and general manager at the Brenton Arboretum.