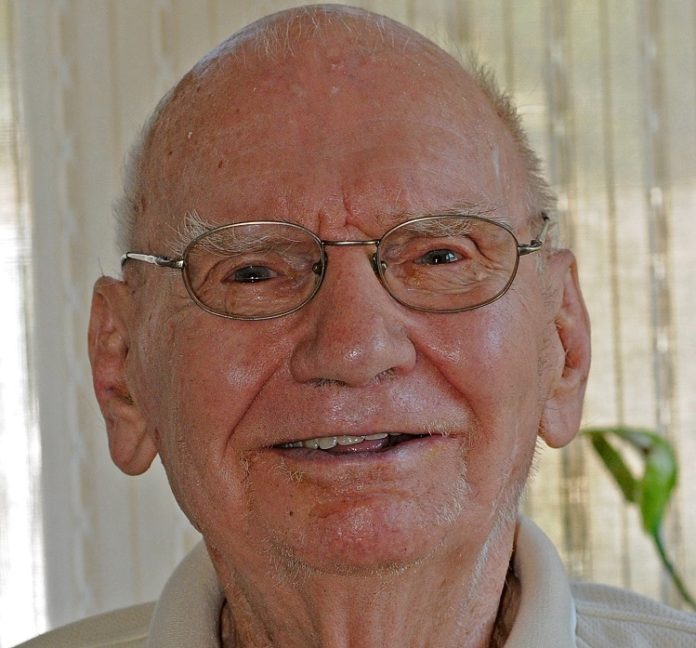 A Memorial Service will be held at 12 p.m. Saturday, Sept. 16 at the First Christian Church in Perry for Francis Wilson, 93, of Perry. Visitation will be held from 11 a.m. until the time of the service. Military Rites will be conducted at Violet Hill Cemetery following the memorial service.

Memorials may be directed to the Francis and Carma Wilson Scholarship Fund in his name and may be left or sent to Murdock Funeral Home.

It is with heavy hearts that we have said our final goodbyes, but we are relieved to know that he’s now with his “Carm.”

He was a man who appreciated a hearty breakfast, the character building properties of hard work, a blazing hot fire and an afternoon nap.

He gave generously and did not expect praise or adulation in return.

Francis was awarded a Purple Heart for a freezing stint in a World War II foxhole, which seemed to put him on a never-ending quest for warmth.

But above all he was a loving husband and father and a generous, proud grandfather, always kind and always radiating warmth to those around him.

Blairsburg is a small town, but was fundamental in shaping who he would become as a person. He eventually left Blairsburg, but Blairsburg never left him. Even in his final year, as his words became scarce, he would ask about Blairsburg.

Barely out of his teens, he was sent across the world to fight in World War II, an experience that forever shaped his worldview and provided him with an appreciation for everything he did and had thereafter.

He often told the same war stories. But his stories never grew like fish tales. No, they were heavy enough in their truth. He told a story about encountering a group of German soldiers as the war was coming to a close. They were young guys, like him. And he realized in that moment that they were all the same in that none of them wanted to be there.

He served his country with honor and dignity, and was always proud of that service.

After the war, Francis met Carma Marie Brofer. They were married Aug. 13, 1950, in Jackson, Minn. They eventually settled in Perry, where they filled their big house with four sons.

They were active members of the Perry community and of the First Christian Church.

Francis worked for many years at the Wiese Corporation. He worked his way from a laborer to the position of executive senior vice president before eventually retiring.

Francis and Carma travelled extensively, but their travels were always centered around appreciating history and learning more about the world. For more than a decade, they could often be found in webbed lawn chairs, watching their granddaughter’s softball games.

He was preceded in death by his parents; one brother; one sister; a grandchild;and his beloved wife, Carma, on Dec. 9, 2014.