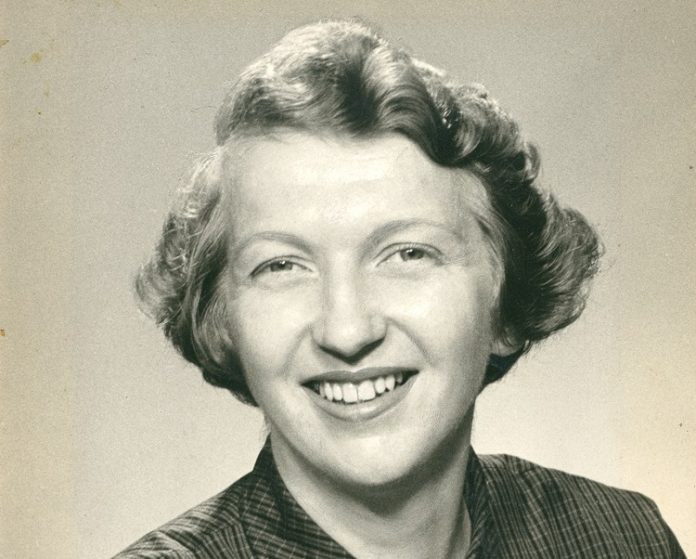 Helen Elizabeth Dewey, 95, of Perry passed away Thursday, Jan. 3, 2019, at the Pearl Valley Rehabilitation and Nursing Center in Perry, Iowa. Her incredible life has come to a natural end.

Helen donated her body to the College of Osteopathic Medicine at Des Moines University. It was her wish that she could continue teaching after her death. Murdock Funeral Home in Perry handled arrangements. A Celebration of Life event will be held this summer.

She went to Perry High School and graduated in 1940.

She earned a Master’s Degree in mathematics from the University of Iowa in 1945.

Teaching math was her passion. She traveled to almost all corners of the globe, spreading knowledge of algebra, geometry and calculus to students who adored her.

Helen’s career began with a stint at Lever Brothers, and she went on to teach math in LuVerne, Iowa, and in Colorado and Idaho. In 1951-1952 she was on the island of Hokkaido, Japan, teaching new U.S. Army recruits basic math skills.

Then it was on to the American School in Japan (ASIJ) for seven years, where she endeared herself to her students with her wonderfully interesting personality, excellent teaching skills and kind heart.

This poem, written by Bill Crydeman (class of ’55), is a reflection of the fun that Helen had while teaching math.

He writes: “I was a bit bored one day in class, and she had picked on me (good naturedly) for my sins. So in a moment of quiet introspection, I penned the following immortal words:

“O great is our teacher, Miss Dewey.
She sometimes gets on our nerves.
I hate to be snotty, but look at her body.
It’s all angles, and not any curves!

“I think she threw an eraser at me, all the while laughing. At least she didn’t kick me out! I still love the little lady!”

A touching tribute that Helen wanted to share was written by one of her students, John S. Hsia, in a book of mathematical tables in June 1957:

“To Dear Miss Dewey, This is a token of my appreciation of all the things you’ve done for me. My very best wishes and I pray that wherever you traverse, success and happiness march with you. Indeed, you’ve proved to be the most valuable friend of mine, and such person is very seldom found.”

Helen retired from teaching in 1991, when her eyesight was hindered by macular degeneration, and returned to Perry, Iowa.

Active in retirement, she was a loyal and ardent Democrat who worked on many campaigns and encouraged all to vote.

She was an avid gardener, always having flowers and tomatoes, which she liberally shared with friends and neighbors during the summer months.

She was also employed as a U.S. Census Bureau worker and helped to make sure all in Perry were counted.

In retirement her many library shelves in the family home on Fourth Street were filled with dozens and dozens of books inscribed by a lifetime of grateful students. Helen helped many students from abroad apply for scholarships and get into colleges in the U.S.

The family wishes to extend their gratitude to the wonderful, nurturing and loving staff at Pearl Valley Rehab and Nursing Center. No words could describe the great comfort that the family feels for the love and attention provided by the staff when we were unable to be by her side.

And, of course, Aubrey from EveryStep Hospice! Aubrey’s dedication to her work and assisting with Helen’s end-of-life care was compassionate and appreciated by all members of Helen’s family of friends.

Mary Weaver was at Helen’s side as she passed. Mary has been incredible in her support and advocacy for Helen over the past six-plus years — and much longer friendship. Liz Garst also tended to Helen’s needs and care with unwavering dedication. The family is in great debt to the strength of both Mary and Liz’s friendship with our remarkable Helen.

Helen was always the most popular guest at our Dewey-VanAllen-Horan family gatherings. Everyone clamored to sit by Helen as she was the most interesting conversationalist. Politics, human rights — you name it. No topic was spared by Helen and her wit.

One of Helen’s favorite quotes was, “The U.S. Constitution was written by geniuses so idiots could govern.” It was a sentiment she found ringing particularly true in the current situation.

In her 2017 holiday letter to friends, she wrote: “We, here in the U.S., are daily chagrined and embarrassed by our current leader. We are hopeful that you may experience peace within your soul.”

Helen had a wonderful memory, which served her well as her sight and hearing failed. Helen led a full and interesting life, with friendships all over the world. We should all be so lucky and wise to spend our lives as Helen did.