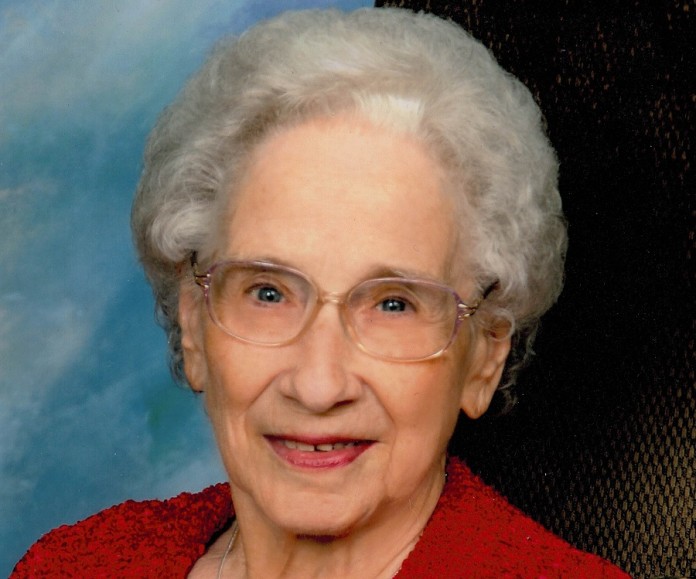 She had suffered from Alzheimer’s disease, as did her mother and three of her four sisters.
Joyce was the youngest of 10 children (five boys and five girls) born to Harry Claude Riley and Eliza Leota (Meredith) Riley of rural Rippey.

She graduated from Rippey High School in 1941 and entered Iowa State University that fall, where she met her husband-to-be, the late Paul Eugene Maddy, her first weekend there.

They wed Aug. 9, 1942, at Collegiate United Methodist Church in Ames.

Her early years were split among taking university classes to obtain a teaching certificate, working to put hubby through college, earning her own additional university credits in summer school and typing her husband’s letter-perfect master’s thesis on a manual typewriter — all while juggling mom duties for their two daughters.

From 1951 through mid-1958, Joyce taught fifth graders in Eldora, where she gained respect from the students— like the time she removed her high heels to run a P.E. relay race in her seamed nylon stockings, just to even up the teams’ numbers. She became popular, in part, because of her traditional spring class field trip to tour the Iowa State Capitol Building, which many students had never visited. More than a half-century later, many still recall going there.

Teaching children to love to read was uppermost on her agenda. To calm the students down post-lunch, she’d read to them for a half-hour — often a chapter from a Hardy Boys or Nancy Drew mystery. For some, it was the only time an adult had spent time reading to them. In the 1950s, when many parents believed reading comic books was surely a step towards juvenile delinquency, Joyce defended kids and their comics: “Well, at least the child is reading,” she reasoned.

Joyce became an excellent seamstress, often working late into the night sewing party dresses or matching Easter outfits for her daughters, tailoring a suit for herself or creating a foldable canvas tent for top-of-the-station-wagon camping, masterfully mind-reading from an elusive pattern in Paul’s head.

After a family move to southern California, she again taught fifth graders in El Monte. There she was surprised to learn that phonics wasn’t taught as a stepping stone to reading. In fact, it was a no-no. She was sure students would fail at reading without that skill. So covertly, she and the school’s administration established a “don’t ask/don’t tell” policy of incorporating phonics into her fifth graders’ curriculum . . . and the students finally learned to read.

After a year in California, she and Paul joined the U.S. Agency for International Development, first being stationed in Tel Aviv, Israel. Dissatisfied with the English-speaking school where her daughters went, she helped establish an American school for 50 students, where she taught fifth and sixth graders. The next year, she taught while also becoming the school’s head teacher, essentially its principal.

Joyce and the other founders originally ordered 400 textbooks and library books to be shipped from Iowa. Today what has become the Walworth Barbour American International School has two campuses in Israel, with 600 students and more than 31,000 books in its central library and media center, in addition to magazines, online databases and media equipment.

Joyce was too restless to stay at home, so she always found administrative work at their subsequent posts in Nigeria, Sudan, Liberia, Panama, Washington, D.C., Vietnam and Bangladesh. Starting in the mid-’70s, she learned and taught other government employees how to use computers -– long before most of us had computers at the office or at home.

Away from the office, her Iowa farm-honed cooking and baking skills came in handy, especially when entertaining — whether she was turning out homemade sticky cinnamon rolls for a brunch for 85 or baking unheard-of homemade hot dog and hamburger buns for beach-picnic cookouts.

From early childhood, Joyce exhibited a keen talent for music and learned how to play the violin, accordion and piano. She had perfect pitch and held less-than-charitable opinions of people whose off-key efforts hurt her ears. She played the organ at various churches, starting at the United Methodist Church in Eldora and continuing throughout several overseas posts. In retirement, she became a bell-ringer at the First United Methodist Church in Perry.

Joyce’s great-granddaughters Hailey and Lindsey have inherited her exquisite ear.

Joyce and Paul enthusiastically took up golf in their 40s. After their 25-year foreign-service career, they retired in 1984 to her hometown area, Perry, where she helped care for her four older widowed sisters who resided at Rowley Masonic Community.

She also continued her 40-year hobby of genealogy, dating to pre-Internet days, meticulously documenting source records, making more than 20 research trips to the Mormon genealogical library in Salt Lake City, in addition to searches at the National Archives in Washington, D.C. and visits to East Coast cities where her ancestors had lived. All of that material has been preserved and passed along to her namesake granddaughter, Jennifer Joyce (“JJ”) Turner, who has vastly extended our knowledge of the family heritage.

Joyce was predeceased by her parents; nine siblings and their spouses; and husband of 72 years, Paul.

There will be no funeral at this time. Burial in the Rippey Cemetery will be private. The family will hold a memorial service at a future date.