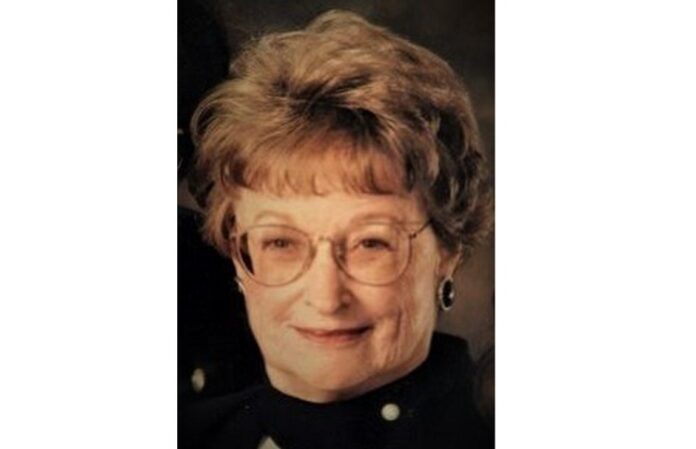 A longtime children’s and veterans’ advocate has died. Rosalene “Kay” Annette Corbus Zike, 93 years young, passed away at her Pacifica, California, home, overlooking the ocean, with her two daughters, Carole and Susan near, on Nov. 16, 2020.

The only child of Chester Corbus and Pearl Allshouse Corbus, Rosalene was born in Perry, Iowa, a Christmas Day baby in 1926, graduating from Perry High School in 1945. As a young adult, she decided that “Kay” would be her nickname going forward.

Kay graduated from American Institute of Business (AIB) and worked for the U.S. Veterans Administration in Des Moines before enrolling at Simpson College in Indianola. She belonged to Alpha Chi Omega social sorority and obtained an elementary education degree.

She met a handsome World War II veteran and psychology student on campus, Victor Zike. They married in 1947.

Victor’s advanced educational degree work took them to Champaign-Urbana, Illinois, and his professional career to Independence, Iowa, Glenwood, Iowa, where Kay taught special education,; and Perry, where she served as a substitute teacher and Perry preschool director and teacher.

She later started Kay’s Pre-School, continuing to offer hundreds of area children developmental and social skills to prepare them for kindergarten. As they grew into young adults, they often shared the positive impact of their experiences at her preschool.

Kay was a member of the International Organization for Professionals in Education of Young Children (OMEP) and the Dallas County Child Advocacy Council.

A devoted mother, Kay made sure she was always home at the end of each school day. Piano lessons were a must for her daughters as were bike rides and trips to the Ledges State Park. Picnics at the Des Moines Art Center were common, and the performance arts were to be appreciated as well.

A lifetime member of the First United Methodist Church in Perry, Kay served on the administrative board, council of ministries, taught Sunday School and sang in the choir.

Growing up, Kay was always proud of her agricultural roots and helped her parents with their fruit and vegetables business, Plainview Gardens. Later she and Victor built Roz-Vik Polled Herefords, helped the girls show their 4-H cattle and managed their farms, which later became Century Farms, north of Perry.

Kay worked at Ultra-Cool Corp. in Des Moines about five years and then relocated to Pacifica, California, in 1990, where she joined the U.S. Department of Veterans Affairs in its regional offices in San Francisco and later Oakland.

She retired after 26 years of committed service to America’s veterans. She served as an administrative assistant in several divisions – loan adjudication, financial records and public contact — and as a director’s secretary. She received numerous awards during her career and was a part of a team honored for its success during the Veterans Education Advance Payment project.

“Every one of my files represents a veteran who defended our country, and it has been my commitment to work as long as possible to ensure their questions are answered, their appointments are scheduled and their background records are complete,” she said at her retirement party just short of her 90th birthday.

A special thanks to her longtime cardiologist, Dr. Felix Millhouse of Daly City, California, whom Kay credits with extending her life by 15 years, and recent caregivers Pat Pangan, Teresa Williams and Miss Lily for their loving kindness during Kay’s hospice.

Due to current COVID-19 social gathering restrictions, a memorial service in Perry to celebrate Kay’s life will be held at a later date. To sign an online condolence, visit www.carrisfuneralhome.com. Carris Family Funeral Home and Cremation Care is assisting Kay’s family with arrangements in Perry.