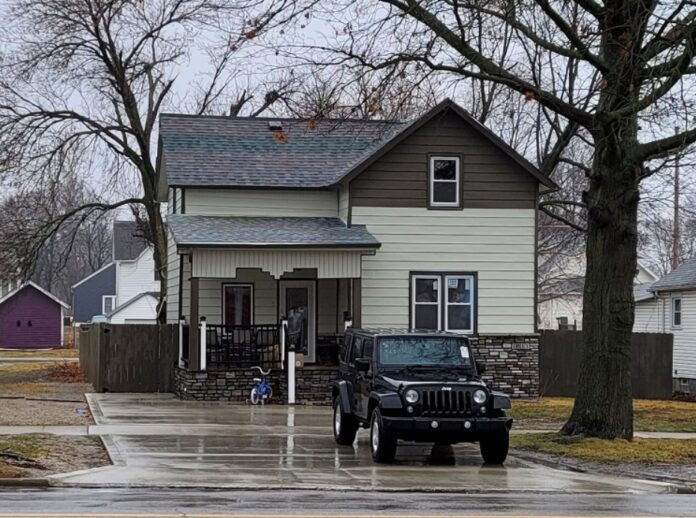 First of all, disclaimer: I do not live in Perry. In fact, I have not lived in Iowa for several decades now. Further, due to bigotry and racism displayed against my immigrant wife and step-daughter, I may very well never again set foot in Iowa. With that out of the way:

This proposed ordinance change is the very personification of white-privilege-meets-small-town-America. In the case of the photo of the brownish home with the Jeep parked in the drive, that is a simple, standard, two-car-wide driveway. It does not appear as though there is a garage on the property.

To restrict the width of a drive, premised on the frontage of the property, is to say, “Sorry, you can’t afford a large enough home/property for a side garage. Too bad. Park on the street. Except, of course, in the winter, when our snow ordinance requires you to NOT park on the street.”

You see, back in the ’50s and ’60s, when most American labor was union labor, one income supported a household. Such has not been the case for many, many years now except for the privileged few. So now we have America’s working poor in need of two vehicles, one for him to take to work, and one for her to go to work.

Is it truly the intent of the Perry City Council to tell the working poor they need to sell one of the family cars and somehow get two people to two different work locations using one vehicle, all because they lack the finances to buy a larger property?

Letter to the editor: How will anti-abortion laws be enforced?

Letter to the editor: Time to expand, not cut, Social Security

Letter to the editor: Privacy threatened by activist SCOTUS clique

Letter to the editor: Anti-mask judge is unqualified, extremist

Letter to the editor: Gala Chair thanks community