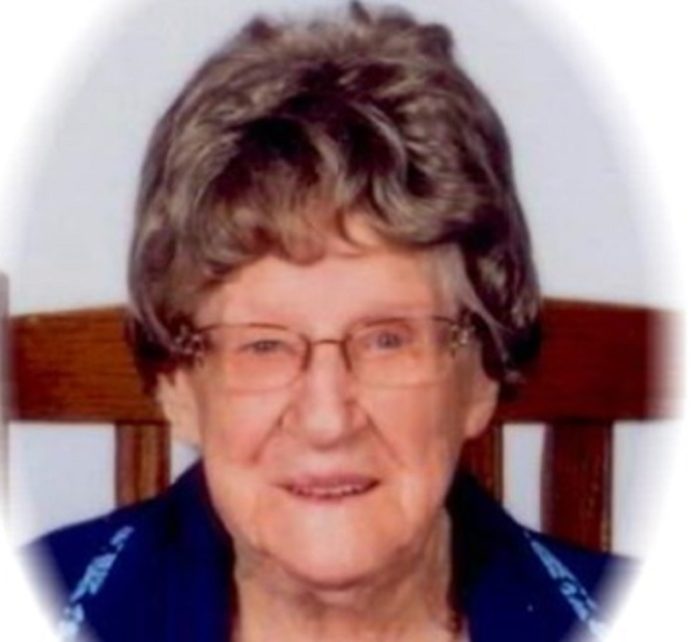 Services for Mary “Enid” Burkhart were held at 2 p.m. Tuesday, April 26 at the First Christian Church Disciples of Christ in Woodward. Visitation was held after 1 p.m. Monday, April 25, with family present from 6-8 p.m. at Hastings Funeral Home in Perry.

Interment took place at the Woodward Cemetery in Woodward, Iowa. Following the service a luncheon was served at the church.

When she was about 2 years old, the family moved to the family farm just outside of Woodward. Growing up, Enid was active in 4-H, Christian Endeavor and played the violin in the school orchestra.

She started playing the piano for church when she was 15 years old and later played the organ and kept the position of organist until the late 1990s. She kept playing the organ at home until she was 100.

Enid graduated from Woodward High School in 1931 and went on to Iowa State Teachers College, now the University of Northern Iowa, where she received her teacher’s certificate. Later she finished her education at Drake University, where she earned a bachelor’s degree in 1964.

Her first teaching position was in a nursery school in Woodward that was started through the WPA program. She continued teaching at East Peru, Iowa, until her marriage.

In 1936 Enid and Clifton Burkhart, her high school classmate, were united in marriage at the Little Brown Church in Nashua, Iowa. They set up their household on a farm north of Woodward and stayed on the farm until 1982 ,when they moved into Woodward. To this union were born four children, Roger, Dean, Judy and Jane.

Enid returned to teaching in 1959, while raising her family, this time at the Woodward Community School, and she retired from there in 1972.

Enid and Clifton enjoyed 55 1/2 years of marriage before his death in 1991. During their marriage they traveled to all 50 states plus Mexico and Canada. After retirement, they also enjoyed wintering in Texas.

Enid’s hobbies included crocheting, doing crafts and genealogy. She wrote for many years a column called “Does Anyone Remember?” for the Woodward newspaper. A collection of her columns was put into a book and later published.

She was preceded in death by her parents; her husband, Clifton, in 1991; and her brother, Ralph Staker, and his wife, Gwen.