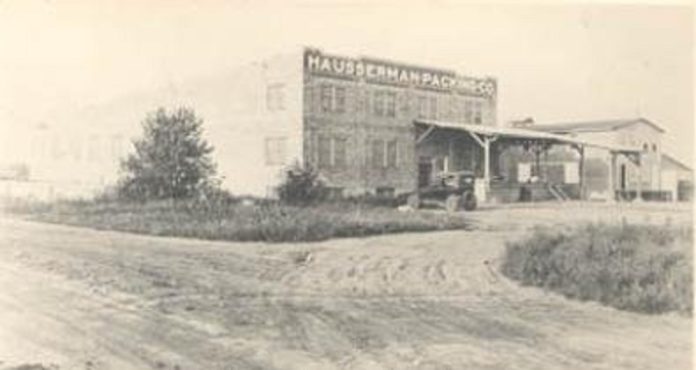 In 1899 there was a large two story structure a mile west of Perry called the finest and most up-to-date sorghum plant in Iowa. The mill owner, Carl Arnold, said the mill had the capacity 500 gallons a day. On March 8, 1901, the mill burned to the ground. The building was a cheap one so that the main loss was the machinery.

In August 1901, after the fire, the plant was rebuilt near the Milwaukee bridge and the name was changed to the Perry Brick and Tile Co. The first brick machine that was installed failed to work with the local clay, and a new and larger one was installed. Soon they were turning out close to 15,000 bricks a day.

When the tile plant at Jamaica burned, Mr. A. Z. Zartman came to Perry to be the plant manager. Work was started in April 1914 on the new factory for the Jones Cement works on the block of land belonging to the Inter-Urban Railway between Evelyn and Estella streets.

They put in their own well so the cement plant has its own system of water. They had a hard time putting up the plant. Storms took down the walls four times as they were building it.

In 1919 Charles Hausserman, who had a small meat market in Perry, started a local packing plant. He used the site of the old Shorthill Steel Co., and in the spring of 1920 Pearson and Son put up the first buildings.

By June the plant was running with 30 employees and four salesmen. But some of the cold storage space was improperly built, causing a large loss of meat and a long time to fix. Hausserman was hit by a train in 1921, and in 1926 the company became the Perry Packing Co.

In the fall of 1933, Arnold Bros. of Chicago got the plant, and they remodeled it and  reopened in February 1934. In 1936 they sold out to Swift and Co., and for 20 years the meat packer did well but because of water and sewer problems, they became unhappy with Perry and closed in July 1956.

A canning factory was started in Perry in April 1918 by Lee Reeves of Waterloo. Most of the stock was held by local men, and they raised a building 300 feet long on 2.5 acres along the Inter-Urban track. Part of the building was two stories.

In 1920 it was consolidated with Grimes Canning Co. of Grimes. But all was not good. Drought years, overproduction, low prices and competition led to financial troubles. In some seasons, the plant did not run at all, and in others the yield was cut either in quantity or quality or both. The company was reorganized in 1937 but closed in 1944.

The Globe Manufacturing Co. was started in January 1907 in the old Shotwell and Davis building north of the tracks. Soon the plant was too small, and a new, brick, two-story building at Fourth and Bateman streets by the tracks was put up.

As this time, A. S. Kibby realized that B. C. Dilendeck had control of the plant, so he withdrew from the company and went back to the original place to start over with a new idea for another machine.

The Globe Manufacturing Co. burned down Jan. 27, 1915, but it was soon rebuilt. During the best times, it had up to 60 workers, but depression and keen competition closed it about 1930.

Kibby, with his new idea and some money salvaged from the first company, started the At Last Washer Co. This was the beginning of the period when Perry had two washer plants.

After the war, Kibby put up a new plant on First Avenue next to the tracks, and his brother, Ernest Kibby, joined him. But the Kibbys never had the capital to develop and promote the
business and after Mr Kibby’s death in 1929, all work stopped.

The Progressive Foundry started in the basement of the At Last Washer building in 1918 by Richard Tietgen of Chicago. At that time, Tietgen was making castings for both washing machine factories.

In 1931 the Des Moines Valley Produce Co. came to Perry, moving into the old Globe Manufacturing building. For the first four years, they just bought eggs and poultry for Priebe Co. of Chicago, but in 1935 it was changed to a concentration plant.

In October 1940 the plant was destroyed by fire. A year later, they moved into a new plant at Second and Bateman streets, and in 1945 the name was changed to Priebe and Sons Inc.