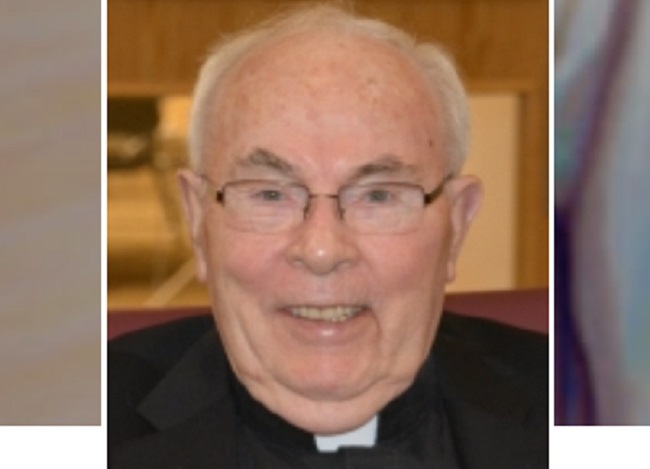 Eugene graduated from St. Mary’s High School in Panama in 1951, attended Conception Seminary College in Missouri and Mount St. Bernard Seminary in Dubuque and was ordained by Bishop Edward C. Daly O.P. at St. Ambrose Cathedral May 31, 1959. He received a master’s in education from Creighton University in 1967.

His first assignment as a newly ordained priest was as a substitute at St. Patrick’s in Neola, with studies at Creighton University. In the fall of 1959, he began his ministry as a teacher at Dowling Catholic High School in Des Moines until 1963. He served as an associate in Earling, as an administrator in Weston and taught at St. Albert High School until 1967.

In 1969 Eugene was named pastor at Logan, Woodbine and Magnolia, co-pastor at Christ the King in Des Moines in 1971 and as a pastor in Missouri Valley until 1977. He served as executive officer at the Council Bluffs Board of Education. In 1979, he was appointed pastor of Our Lady’s Immaculate Heart in Ankeny.

He served as pastor in Perry in 1986 and then in 1988 as pastor in St. Theresa’s in Des Moines. After his sabbatical in 1993, he helped at St. Ambrose until his final assignment as pastor in Granger, beginning in 1994. He retired in 2009 and lived at the Dowling Priests’ Residence.

He was preceded in death by his sisters, Natilia Koch and Madonna Feldman; and brothers, Linus, Louis, Charles and Richard Koch.

Memorial contributions can be made to the Diocese of Des Moines Priest Pension, Dowling Catholic High School or a memorial of your choice in Rev. Eugene Koch’s name. Online condolences can be expressed at www.caldwellparrish.com.