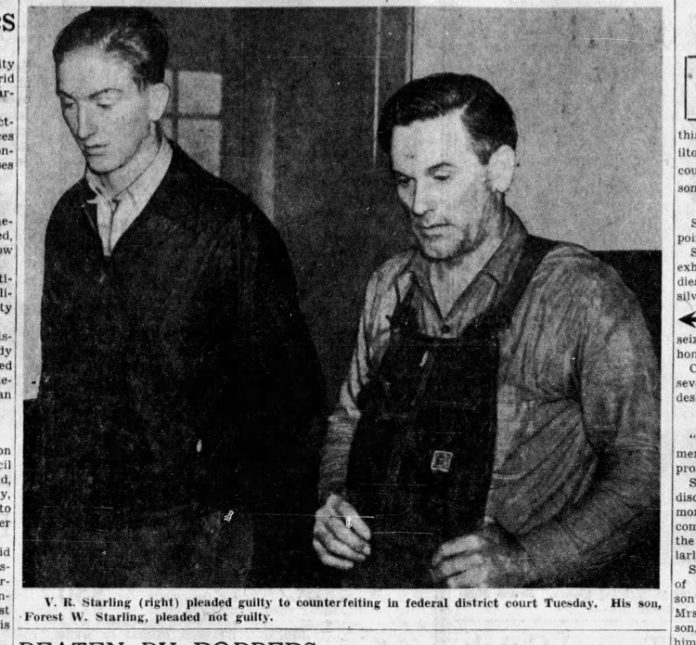 At 9:30 at night, they turned off their car lights and headed down the road to the farm of Perry farmer V. R. Starling. Starling was widely known in Perry as a rendering plant operator for the past 10 years and had no criminal past.

The raid made by the officers was based on substantial information that cast considerable suspicion at Starling as a counterfeiter. Fake half-dollars had begun to show up some months back and were first picked up at the Federal Reserve Clearing House in Chicago.

The money was dated 1889 and 1912, and what first aroused the suspicion of the feds was the milled edges of the coins, which were too perfect for money minted 26 and 47 years earlier. The milling should have been more worn away if the coins were circulating over such a long period.

But hats off to V. R. Starling, said the secret service men who raided his counterfeiting operation. They said Starling’s fake coins were of the finest quality ever found, and his set-up and equipment were the most elaborate they had ever seen in their experience.

Two additional proofs that the coins were counterfeit were found after a complete check of the false money. A minute crack in one of the dies left an almost imperceptible dent in the face of some of the coins, and the rounding of some of the letters pressed on the coins also
proved to be false.

The trail to Starling started in Des Moines, where a large volume of silver had recently been purchased at a jewelry store there. The store clerk stalled the buyer while trying to call bureau investigators but by the time law enforcement got there, the purchaser was just leaving the scene.

But they got his car’s license plate number.

When they raided Starling’s farm, more then $110 worth of false half-dollars were found along with $213 worth of slugs ready to receive the impressions and all kinds of money-making machinery, including crucibles and equipment for mixing and making the metal.

Among the most elaborate machines was a homemade rolling mill. The mill was made of auto gear boxes and was run by an electric motor. It was geared up to a rating of 86-to-one in order to exert the pressure needed to roll the strip metal to the needed thickness for coin making.

One of the stamping presses was the hydraulic type used to cut the slugs from the rolled strips. Most of the equipment was found it the basement of the old farmhouse just west of town, and it was marked as evidence and tagged for use in the forthcoming trial of Starling and his son, Forest Starling.

Later at the city jail, V. R. Starling told a state agent, “I’ve got just one gripe against President Roosevelt. If the country hadn’t gone off the gold standard, I would have made gold dollars.”

But then Starling added, “It’s like this. I’m at your mercy. I don’t know one law from another, and what shall I do now?”

V. R. Staring, 51, of Perry was arrested May 14, 1938, in what news reports called the “Midwest’s largest counterfeiting ring,” and he died at 11:20 on Saturday, Aug. 27, 1938. Starling had been in an “iron lung” at the hospital since the previous Friday afternoon, and the doctors said death came from a brain tumor that caused a stroke.

Forest Starling was temporarily let out of prison to attend his dad’s funeral at the Methodist
Episcopal Church in Perry, after which all charges against the younger Starling were dropped.