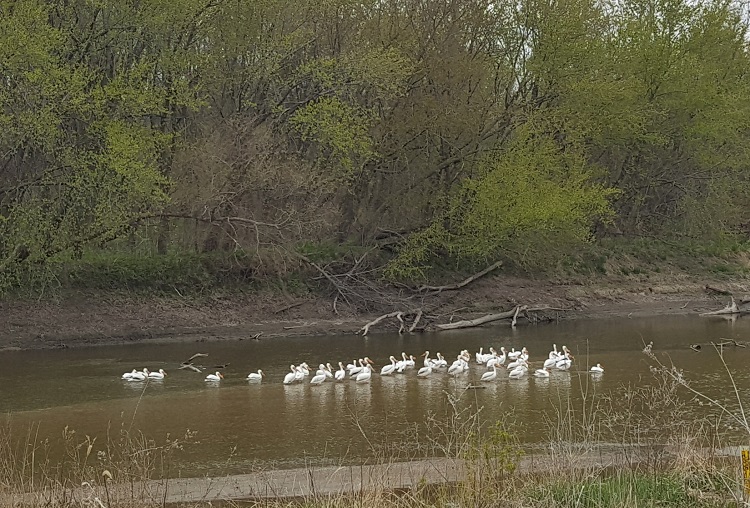 A flock of about 40 American white pelicans stopped for lunch Friday in the North Raccoon River near Perry as the wend their way to northern Minnesota and Canada for the summer.

American white pelicans pass through Iowa in April on their northward migration to northern Minnesota and Canada and again from mid-August through September, when they migrate southward for the winter.

American white pelicans respond to threats by flying aggressively into a near-stall or, on land, adopting an upright posture and grunting. More severe threats from aerial predators provoke open-billed displays, in which the bird lunges forward, jabbing with its enormous bill. Predators include foxes, coyotes, gulls, ravens, great horned owls and bald eagles.

More than 10,000 American white pelicans can be seen at an annual pelican festival in Jester Park on the west shore of Saylorville Reservoir. The festival is held on the weekend following Labor Day and is co-sponsored by the Des Moines Audubon Society, the Iowa DNR and the U.S. Army Corps of Engineers. For more information, call 515-323-5300.

Justice proves too costly for poor man from Greene County

Axne fights for farmers in June tour of district