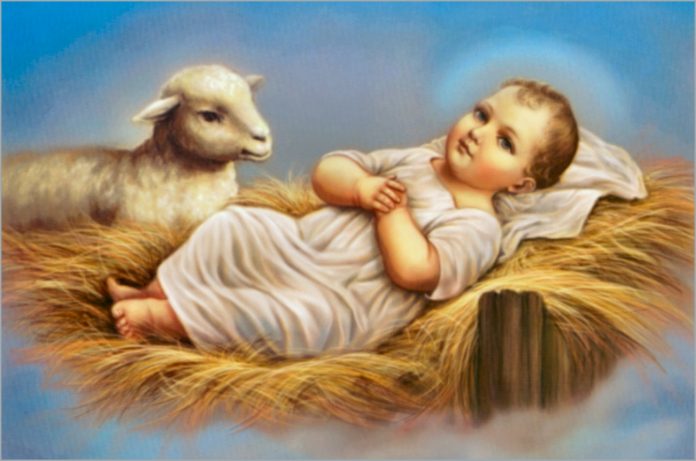 Baby Jesus will be present at the Iowa State Capitol again this Christmas season, according to Tom Ciesielka, public relations spokesperson for the Thomas More Society, a Chicago law firm promoting Christian decorations on public property.

Ciesielka said Iowa Gov. Kim Reynolds will be the keynote speaker for the opening of the nativity scene display at the capitol Monday, Dec. 18 at 11 a.m. The traditional Christian creche will be on display in the northwest corner of the first-floor rotunda at 1007 E. Grand Ave. in Des Moines.

Baby Jesus will remain on display through Dec. 26, Ciesielka said.

The Thomas More Society, a Chicago law firm, and American Nativity Scene, a group fighting for Baby Jesus in the war on Christmas, work together to promote privately funded manger scenes in public squares.

“Anti-Christian, anti-Christmas rhetoric and Satanic expositions merely serve to provide sharp emphasis by means of their stark contrast with the positive, uplifting, hopeful and joyous message of Christmas,” said Tom Brejcha, president and chief counsel of the Thomas More Society. “The Christmas message bears secular as well as religious significance, as it highlights the hope and miracle of birth and new life, the inherent dignity of each and every human being.”

Martin Cannon, a Thomas More Society attorney from Crescent, Iowa, said the society is “excited to share our Christmas message with the public, as the Constitution allows us to do. More than just an opportunity to share our faith, it is a chance to invite everyone to seek peace on earth and goodwill to all.”

The mission of American Nativity Scene is to place a nativity display within or directly outside state capitol buildings across the U.S. Iowa is the 15th state to permit a state capitol manger scene.

“Privately funded Christmas displays are legally allowed in traditional public forums such as state capitols, county complexes or city hall lawns,” said Ed O’Malley, president of American Nativity Scene. “We are committed to our goal of keeping Christ in Christmas across the nation.”

O’Malley said pro bono work by the attorneys at the Thomas More Society has ensured that citizens who privately fund religious displays on public property are accorded their right to do so as guaranteed by the First and 14th Amendments of the U.S. Constitution. A permanent federal injunction banning discrimination against religious speech ensures that the Christmas creches are protected from erroneous applications of the widely misunderstood concept of separation of church and state.

“While each Christmas season brings controversies, including challenges by atheists, secularists and even satanists, the American Nativity Scene remains constant in providing a strong and united front in the face of attacks on religious freedom,” Brejcha said.

In 2016 the Iowa Department of Administrative Services signed a contract with the Thomas More Society detailing the nativity scene and covering related matters, such as personal-injury liability insurance protecting the state from expenses.

“Atheist groups may mock our message,” Brejcha said, “but we will not be silent.”