Perry-area voters were inspired by the moral power of U.S. Sen. Cory Booker’s message when the New Jersey Democrat brought his presidential campaign to Perry Jan. 1, but low poll numbers and a shrinking war chest caused Booker to end his quest for the nomination Monday.

Booker was polling at 3% among likely caucusgoers, according to the latest Des Moines Register/CNN/Mediacom Iowa Poll released Friday evening.

Among Booker’s policy proposals was the establishment of a $1,000 savings account for every child born in the U.S. to help close the racial wealth gap. His gun-control plan  included a robust licensing program, and his criminal justice reform plan focused heavily on addressing sentencing disparities for drug crimes.

But it was his uplifting, unifying message that featured strongly in the stump speech he delivered in Perry.

“We are at a crossroads,” Booker told about 75 people at his New Year’s Day rally in Perry. “This is a moral moment in America. It is not left or right. It is right or wrong.”

He contrasted his own message of love with the politics and hatred and division practiced by President Donald Trump.

“This is a moral moment which needs from our party not to get into more tribalism, not to become like Trump because a lot of folks, they seem to want us to be more Trumpy than Trump,” Booker said. “We don’t need to be doubling down on his values and thinking, ‘Well, that’s the way we’ve got to win.’ No. It’s the way we lose. And even if we win the presidency, we lose the nation. It becomes more divided, more challenged, more separated. What we need now in this moment is leaders to understand that this is a time we must be calling to each other for a revival of civic grace, a more courageous empathy for each other. We must help people recognize the truth of this country, what our ancestors have shown, the greatest thing, which is patriotism. But let me tell you, what’s the definition of patriotism. Patriotism is love of country, and you cannot love your country unless you love your fellow countrymen and women. And love is not sentimentality. It’s not weak. Love is strong.”

Trump mocked Booker and the suspension of his campaign in a Monday tweet.

“Really Big Breaking News (Kidding),” the president tweeted. “Booker, who was in zero polling territory, just dropped out of the Democrat Presidential Primary Race. Now I can rest easy tonight. I was sooo concerned that I would someday have to go head to head with him!” he tweeted. 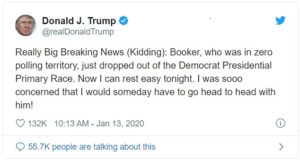 Vermont Sen. Bernie Sanders, now leading the Democratic race in Iowa, replied to Trump’s treet: “Thank you @CoryBooker for running an inspiring campaign to make this the country based on love and justice we know we can become. I look forward to working together to defeat Trump, end his hatred, and lift up working people everywhere.”

Booker encouraged the Perry voters to keep to the high road in opposing the party of Trump.

“Beating Donald Trump is a must,” Booker told the Perry people, “but it is the floor, not the ceiling. It gets us out of a valley, but it doesn’t get us to the mountain top.” He said Democrats will not “win by being like Donald Trump. We didn’t beat Bull Connor by bringing bigger dogs and bigger fire hoses. We beat him and all the demagogues of history by sparking the activism that called to the moral imagination of this country.”

Bull Connor was the racist and segregationist commissioner of public safety for the city of Birmingham, Alabama, during the American Civil Rights Movement of the 1960s. Connor was notorious for sanctioning police brutality and civil rights abuses against non-violent protesters.

Booker told his Perry audience that the “60 million people who voted for Donald Trump are not our enemies. They’re not. We may disagree with them, and we may have to organize and turn Texas blue, but think bigger than that. Please. We are each others keepers.”