The Perry City Council approved a six-year series of sanitary sewer rate hikes Monday to help pay for the planned  $18 million in improvements to the Perry wastewater treatment plant.

The incremental upward adjustments will see residential and commercial sewer-availability rates rise from the current monthly fee of $9.65 to $25.65 a month by the year 2024. The first rate increase, a $6 jump from $9.65 to $15.65, will take effect Oct. 1 and will be reflected in the November utility bills issued by the Perry Waterworks. 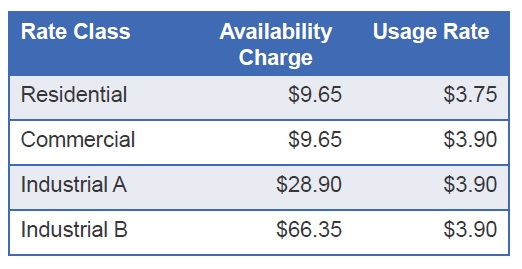 The increases in monthly rates and charges for all classes of sanitary sewer customers are shown in tabular form below:

According to preliminary estimates presented to the Perry City Council in July by Bolton and Menk, the city’s engineering consultants, about $15.6 million of the project’s $18 million cost could be financed through a loan from the Clean Water State Revolving Fund (CWSRF), with an additional $850,000 coming through a federal Community Development Block Grant (CDBG) and $1.7 million from the city’s cash on hand.

The CWSRF is jointly administered by the Iowa Department of Natural Resources (DNR) and the Iowa Finance Authority (IFA). About $5 million in CWSRF funds would be borrowed for 20 years and the other $10.5 million would be borrowed for 30 years. The loans will be repaid through the higher sanitary sewer rates approved at Monday’s meeting.

The following series of posters was displayed at the informational meeting, illustrating the proposed replacements and refurbishments at the wastewater treatment facility.