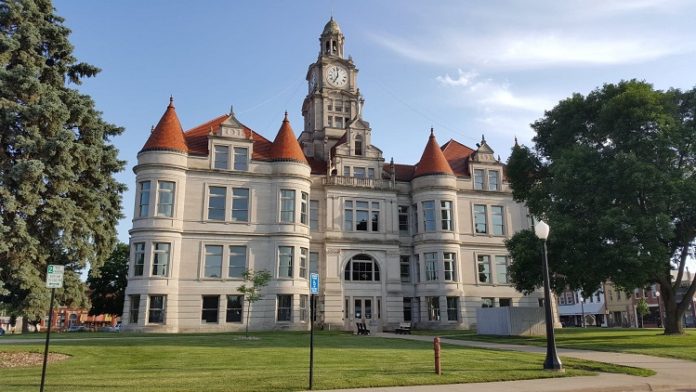 Dallas County Human Resources Director Erin Freeman of Van Meter resigned her position this week, and the Dallas County Board of Supervisors accepted the resignation notice at their Tuesday morning meeting.

Freeman did not respond to the ThePerryNews.com’s requests for comment on her departure, but evidence suggests the HR head quit after enduring more than a year of what she perceived as harassment and intimidation from the spouse of a disgruntled former county employee.

In a message posted on Facebook shortly before the Nov. 6 general election, Freeman described herself as a “victim of harassment” and said only her “closest friends and family know how deeply it has affected me for the last year.”

Freeman posted her Facebook remarks alongside a link to a Des Moines Register story published on the eve of the November election. The news story described a September 2018 email from Dallas County Recorder Chad Airhart to Dallas County Attorney Wayne Reisetter in which Airhart complained about a months-long campaign of harassment by Michael “Wombat” Walrod of De Soto, then an independent candidate for the third-district seat on the Dallas County Board of Supervisors.

In his email, Airhart said Walrod was “doing whatever he can to antagonize and harass me,” including issuing veiled threats on social media and repeatedly haunting Airhart’s workplace on the Adel courthouse grounds, parking next to Airhart’s vehicle for long periods and staring into his office windows.

Freeman described similar behavior by Walrod in her Facebook statement.

“He stalks the work parking lots to intimidate,” she said. “His online threats are dark and terrifying.”

Freeman began working for Dallas County in 2012. Among other HR duties, she was called upon to oversee disciplinary and termination actions, and she was a party to the Oct. 26, 2017, firing of Tonya Walrod, Michael Walrod’s wife and a clerk for 18 years in Airhart’s office.

Tonya Walrod was dismissed for violating county policy on employee conduct and professionalism, according to a termination document cited in the Register report.

“He blames me for his wife losing her county job,” Freeman wrote in her Facebook message, “although I didn’t make or even support the decision made by her manager.” Tonya Walrod’s manager was Airhart, who was elected Dallas County Recorder in 2010.

In one of Michael Walrod’s social media posts, which Airhart included in his September email to Reisetter, he said, “No threat intended but one way or another I will get my Justice for my wife, even if I have to die.” Elsewhere in the same post, Walrod said, “One way or another vengeance will be mine.”

Airhart told the county attorney, “I have fear that he may do something to harm me, my family or staff.” Freeman’s Facebook statement in November showed similar concerns.

Walrod “has threatened to get revenge against me even at the cost of his life and freedom,” she said. “Now more than ever in this time of the #MeToo movement, this behavior should not be tolerated.”

Walrod has not been charged with a crime, and investigators concluded he has not committed any. The Dallas County Attorney’s office said it is investigating the complaint, which Airhart initially lodged with the Adel Police Department in late October 2017.

Adel Police Officer Natalie Gillett responded to the original complaint and spoke at that time with Airhart and the deputy county recorder, Tori Long, who said she felt “extremely threatened by these statements he has made. I don’t feel comfortable walking to and from my car or to go out of the courthouse for lunch,” according to Gillett’s Oct. 26, 2017, report.

Airhart also informed the Dallas County Sheriff’s office about the perceived threats, and deputies “were given a picture of Michael and if he shows up at the courthouse, he is to be escorted by a deputy,” Gillett’s report said. “They also put the HR department on higher security due to these messages.”

Dallas County Sheriff Chad Leonard confirmed that deputies on the courthouse security detail escorted Airhart and some of his employees to and from their vehicles on a number of occassions over the last year due to their anxieties.

“They’ve had some disturbing things said that they were concerned with,” Leonard said. “Anytime anybody would ask us, we would step up and definitely make sure that they felt better about walking into a building or anything like that. We wouldn’t do it just for the courthouse employees, but we’d do it for anybody really.”

Adel Police Sgt. Wade Book followed up on Gillett’s initial investigation, including paying a visit to Walrod in De Soto.

“I made contact with Walrod, and he initially advised me that he would not speak to me,” Book said in an Oct. 27, 2017, report. “He then reengaged with me and asked what he had done wrong. I advised him that based on the information that I had received, he had not done anything illegal at this time.”

Book said that after discussing Walrod’s Facebook posts and his actions around the courthouse, “Walrod apologized for his initial attitude toward me, and I left his residence.”

The balance of Book’s report described his interactions with Airhart, who “stated that his wife was scared to go home and that his employees were scared to come to work. I tried to explain that I could not lock someone up for a non-criminal act, but Airhart cut me off and stated that maybe he would just let the media take care of it. He stated that he would put all this out to the media and that I could hande talking to the Des Moines Register.”

Book said that near the end of their conversation, “Airhart asked if I was going to allow Walrod to shoot somebody before we take it as a serious threat and that this is a little late.” Book closed the case about one year later, on Oct. 29, 2018, the day before the Register story was published and a week before the election.

“At this time, no further evidence has been presented to support a criminal charge of harassment,” Book said in his final report.

In his September 2018 email to the Democrat Reisetter, Airhart, a Republican, said he felt strongly that Walrod should be arrested on a charge of stalking, and he was sharply critical of the county attorney: “I have been discouraged by your office’s lack of support for any effort in the Michael Walrod matter.”

Airhart said he solicited opinions from other county attorneys, including Madison County Attorney and former Iowa Secretary of State Matt Schultz, a Republican, and they all thought there were grounds for prosecution.

“I know that you think Madison County Attorney Matt Schultz is incorrect of his assessment of this matter,” Airhart said. “But in addition to Mr. Schultz, I have talked to multiple respected current and former county attorneys that all feel there are grounds for stalking charges and at a minimum grounds for harassment charges. They have even shared with me instances where guilty verdicts have been returned for what seems to be a lot less. And they have asked me not to share there names as they do not want to get in the middle of it.”

Airhart denied any political motivation for his actions and stressed only his fear of Walrod.

“I have in no way made this matter political,” he said, recommending that Reisetter “turn it over to another jurisdiction to review in order (to) separate Dallas County from the matter completely.”

Citing the confidentiality entailed by an ongoing investigation, the Dallas County Attorney would neither confirm nor deny for ThePerryNews.com that the case has been transferred to another jurisdiction.

Walrod dismissed the Register story at the time it was published as part of a “campaign smear” and an 11th-hour October surprise engineered by his political opponents.

“I have done nothing wrong to merit being charged, and I won’t be,” Walrod wrote on Facebook after the Register story was published.

Recalling his Oct. 27, 2017, conversations with law enforcement, Walrod told ThePerryNews.com, “I gave the Adel PD and sheriff’s office my word that day that they had no worry of violence or confrontation, and there has been none.”

Asked whether the situation has calmed down since the election, Sheriff Leonard said, “We’re monitoring it.” He also noted the Adel Police Department “met with the county attorney’s office and didn’t find grounds for filing any charges.”

In the meantime, Freeman has resigned her Dallas County position and is seeking another berth, possibly with the Polk County Human Resources Department. She spoke bravely of her time in Adel.

“Dallas County has been a great place to work,” Freeman said. “I enjoyed the people that I work with and what I do, and I am really, incredibly proud of all that I’ve accomplished in the last six-and-a-half years in this role. I believe that I’ve done really good things for the employees.”

The supervisors are scheduled to appoint an interim HR director at their meeting Thursday.

Boy run over by vehicle at Woodward-Granger High School

Identity, cause of death investigated by Perry PD, Iowa DCI

One injured in two-vehicle crash on Iowa Highway 141