Perry’s third-annual celebration of International Women’s Day will start Saturday, March 7 at 10 a.m. with a speakers forum, followed at noon by a baked potato luncheon and a screening of “Carrie Chapman Catt: Woman Warrior” at La Poste.

The four speakers, joined by World Link International Exchange students, will share their experiences and observations in 2020, the centennial anniversary of the ratification of the 19th Amendment, which extended the vote to females in the U.S. To mark the centenary, a documentary on the life of notable Iowa suffragette Carrie Chapman Catt will be shown following the luncheon.

Celebration organizer Carol Jackson Cavanaugh will open the event with a short introduction on the history of International Women’s Day, a global day celebrating the social, economic, cultural and political achievements of all women, and she will introduce the theme of this year’s event: #EachforEqual.

“I would describe it as a joyous occasion,” Jackson Cavanaugh said. “In Dirk’s office, the men generally greeted their female coworkers with a gift, and they were given the day off work. All Kazakhstani men and children made a point to wish women Happy Women’s Day. All Kazakhstani women wish each other Happy Women’s Day. I, too, as an expat, was greeted with hugs and Happy Woman’s Day wishes. I thought a lot about this after leaving Kazakhstan in 2017. So when March 8 came around my first year of repatriating to the U.S., it just felt right to start a Women’s Day celebration in Perry.”

The speakers set to deliver 15-20 minute presentations at the 2020 Perry conference include the following women:

The Rev. Barbara N. Bambrick is a Master of Social Work and a member of the Academy of Clinical Social Workers and the American Association of Marriage and Family Therapists. She is also an ordained deacon in the Episcopal Church.

Barbara is a wife, mother, grandmother and great-grandmother, a lover of nature and a passionate partisan of bridge, friends, family, yoga stretches, walking in place, reading and growing plants.

Rekha Basu has been a Des Moines Register opinion columnist for almost 30 years. Her columns, which focus on politics, culture, race, gender, human rights and social justice, are distributed by Tribune Content Agency. She has been a reporter, editorial writer and columnist at papers in New York, Florida and Iowa.

Born in India and raised internationally, Basu has a master’s degree in journalism from Columbia University, a master’s in political economy from Goddard-Cambridge Graduate School and a bachelor’s in sociology from Brandeis University. She got her International Baccalaureate from the United Nations International School in New York. She has an honorary doctorate of humane letters from Grinnell College.

Her other awards include the Martin Luther King Jr. Award from the Iowa Commission on the Status of African-Americans, master columnist from the Iowa Newspaper Association, Iowa Women’s Hall of Fame’s Cristine Wilson Medal for Equality and Justice and the Des Moines YWCA’s Mary Louise Smith and Woman of the Year awards. She has been honored by One Iowa, Friends of Iowa Civil Rights, the Women’s International League for Peace and Freedom, the Iowa Interfaith Alliance, the Iowa United Nations Association, the Iowa Farmers Union and the Des Moines Business Record. Her book, “Finding Her Voice,” is published by the Des Moines Register.

Wendy Goodale is the youngest of five children, grew up in a small town, where life was simple and you could explore the town from end to end without boundaries or fear! She considers herself a “Jane of all Trades” [aka: Jack of all trades], since she has held various positions since graduating AIB in 1987 – from Activities Coordinator, Dental Assistant, Chamber Director, Sales Rep, and Administrative Assistant that she currently holds at PHS.

Wendy has been a spiritual seeker and teacher the last 22 years with several certifications such as: Yoga Instructor (6 yrs), Reiki Practitioner (18 yrs), Integrative Nutrition, and is working on Yu-Mi-We Sacred Living Foundation that would incorporate Nature Retreats, Empowerment Retreats for Women/Teens; Kids Yoga, Sacred Stories & Memoirs, and more

Sophia McDevitt is an eighth grader at St. Patrick Catholic School in Perry. She lives in Perry with her mom, dad, younger sister, Maddie, and younger brother, Matthew. Sophia is an avid competitive swimmer and competes with the club team Des Moines Swimming Federation and also with Perry Area Winter Swim Team and Perry Summer Swim Team. Her favorite strokes/events are the Butterfly and Individual Medley.

Sophia loves spending time with her friends and family and going to Colorado with her grandparents, either hiking in the summer or skiing in the winter. She is very passionate about equal rights for all people, women’s issues and lately has been very engaged in the political process. 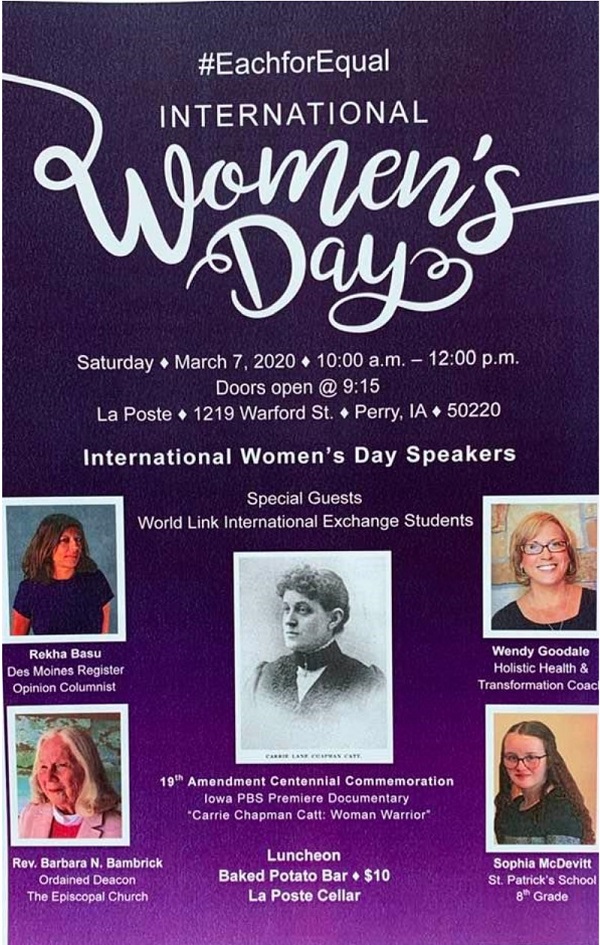