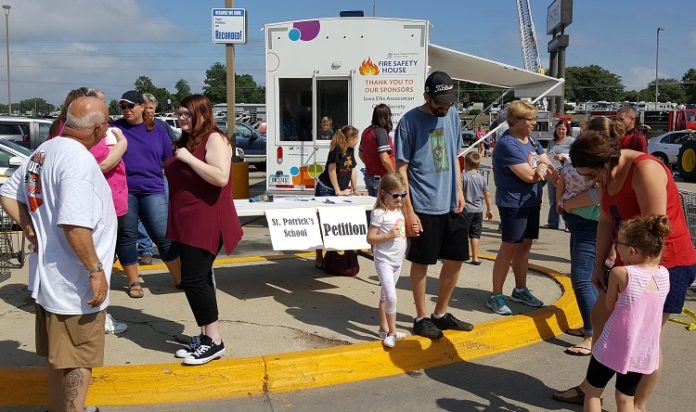 Dismay at the sudden ouster of Eddie Diaz as principal of St. Patrick’s Catholic School in Perry has led some parents, parishioners and community supporters to draft a petition and collect signatures to present to the diocese at a meeting scheduled for Wednesday in Des Moines.

“Our petition states that we’d like the diocese to reconsider the decision and reinstate Eddie as principal,” said Andrea Menz Tunink, a parishioner with children in the school. “But our overall goal is really just to raise the diocese’s awareness of the way the situation was handled and to show not just the school and the church’s support behind Eddie but the community.”

Petitions were available Saturday in the Hy-Vee parking lot alongside the Perry Public safety Day event. Cathie Sucher, another parent with kids at St. Pat’s, helped organize the petition drive with Menz Tunink and others.

“We’ve got a lot of upset parents,” Sucher said. “We don’t know why. I’m mean, you give us a letter at back-to-school, and then there’s no one there to explain to us why it’s a week before school and we don’t have a principal now. It’s the uncertainty of what’s happening with our kids when they go to school next Wednesday.”

Parents attending Thursday night’s back-to-school event at St. Patrick’s Catholic School were shocked to receive a letter from the parish priest, the Rev. Chris Reising, with the news that Diaz would no longer be the school’s principal.

“I must inform you,” Reising wrote in the letter, “that Mr. Diaz is no longer employed at St. Patrick’s School. I realize that this comes at an inopportune time.”

Neither Diaz not the superintendent’s office of the Des Moines Diocese would discuss the circumstances of the severance, but witnesses to the events said Reising summarily dismissed Diaz Thursday afternoon for reasons unknown.

“This was not a well thought out move whatsoever,” Menz Tunick said. “We literally walked into back-to-school night and were handed a piece of paper at the door, and I read it and showed it to Cory and I went, ‘What in the? What is going on?’ and I looked around, and it was quiet in the gym, and there’s all these parents, and we’re all looking at each other and saying, ‘What is going on here? What happened?’ because we all know Eddie. We know what his character is. He does nothing but work for our kids. His programs and his ideas and his drive and his commitment. He’s just an amazing leader. I’ve never seen a better advocate for our community than Eddie.”

Sucher was similarly dumbfounded by the sudden dismissal without explanation.

“As far as we know as parents, he was a good principal,” Sucher said. “He was bringing in new programs. He was more interactive. I saw him every day I dropped my kids off. He was more involved with our kids, and our kids knew him and loved him. And for them to rip it out from our kids with no explanation and no answers, it’s just wrong.We love him, and we’re going to show our support. If it wakes up our diocese and says, ‘We’re not going to take it,’ then at least we’ve accomplished something, and Eddie knows that we support him.”

Casey Riley and Diane Hull collected petition signatures at the evening Mass at St. Patrick’s Church Saturday. They said petitions would also be available at the Sunday Masses and at a number of stores around town, including Ben’s Five and Dime, Casa de Oro, Alice’s Haus Dressin, the El Rey Market and the Caboose.

“We’re asking for anybody to sign,” Riley said. “Anybody who knows Mr. Diaz can sign our petition and say, ‘He’s a good guy.’ You don’t have to send your kids there to sign. People who know him can sign the petition and show that the community supports him.”

Hull, who has worked as a cook at St. Patrick’s School for 10 years, said the staff and faculty was devastated at the news Thursday afternoon and that many were in tears.

“Eddie’s so well respected in the entire community,” said a visibly moved Hull, “and what happened was just . . . .”

“We need to prove the point,” Menz Tunick said, “that you didn’t just do this to our school, but you did this to our community, and it’s not okay.”

“To expect 100 families to walk in and be okay with not having a principal to lead your children? No, it’s not okay,” she said. “You send your kids there. You pay your tuition. You volunteer to help the school out, to raise money and all that stuff, and you get slapped in the face, saying, ‘We don’t care what you think. We’re just going to take your principal away,’ with no warning, no explanation.”